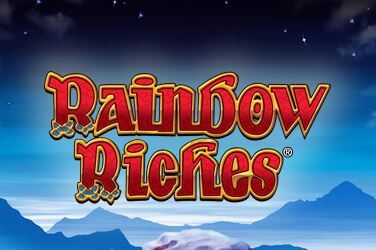 Although it doesn’t have the green colour palette or clovers all over the reels, the slot sports an Irish theme that many other Irish slots have gone for.

It’s not hard to see why Rainbow Riches spurned so many follow-ups when you see how many features the game packs in. Back in 2009, this game was something quite special. Three or more leprechaun Scatter symbols trigger the Road to Riches Bonus, which sees players spinning a wheel to advance along a road, collecting awards as they go, up to 500x the stake. Three or more wishing well Scatters initiate the Wishing Well Bonus, a simple pick and click game in which players select one of their wishing wells to reveal a multiplier prize. This figure is multiplied by their total stake to award a single cash prize. Finally, three Pots of Gold symbols initiates the Pots of Gold Bonus. In this game, gold, silver, and bronze pots spin around the screen slowly before coming to a halt. An arrow will select a pot for you, and as in the Wishing Well Bonus, this will award a multiplier cash prize, again multiplied by the current bet.

With a return to player of 95%, Rainbow Riches isn’t the best bargain when it comes to average returns. The RTP figure means that for every $100 you spend on the game, you can expect to win back an average of around $95. The RTP is a little poor for slots of this kind, though fans of the series likely won’t be too put off. It’s also a medium variance slot, so it’s pretty well balanced in terms of the frequency and size of wins.

Rainbow Riches may look a little dated now, but it’s still worth a shot for players intrigued to see where one of the world’s most popular slot series came from, and it’s available to play on CasinoNZ.com It’s a classic slot that remains good fun to play to this day, with three distinct bonus features and classic payline gameplay. It’s just a shame the RTP is only 95%, or this slot would likely still be a favourite.

We have a range of other titles you can play at Casino NZ including Double Triple Chance and Respin Rhino.