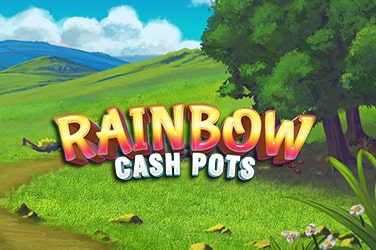 There seems to be a surfeit of Irish theme slots games around at this moment in time, but they are obviously popular with the online slots gaming community as it seems that people just can’t get enough of them. Inspired Gaming has plenty of experience in designing good looking slots games, and with Rainbow Cash Pots, they have done it once more.

Read our review to find out what you can expect from Rainbow Cash Pots.

The five reels and three-row layout is set to a background of a lush green emerald field where a path leads to the end of a distant rainbow. There are ten fixed pay-lines on this game that offers a Return to Player percentage of an industry average 96.5%. The maximum stake is set at $/€/£60 per spin, with the minimum amount set at just 10p and it is possible to win the jackpot of $/€/£222,000 on this medium volatility game.

Playing card symbols from Jack to Ace represent the lower end of the paytable, with a payout of 10x your unit stake coming your way if you land five Aces on a pay line.

Further up the paytable, you will find the pot of gold symbol, a mushroom and a gold horseshoe offering 50x your stake when you land five on a pay line, whilst the four-leaf clover, the boot and the hat offering a return of 100x for five identical symbols. The game’s logo is the most valuable symbol when playing the base game, which will return 200x your bet if you land five of them on a pay line.

There is only one bonus game included in Rainbow Cash Pots. However, the amounts you could win certainly makes up for the dearth of bonus features. Unusually, there is no wild symbol in this game either, which is a departure from most games of this type, but the pot of gold symbol makes up for this as you will see.

If you get a pot of gold symbol on your reels on a winning line, they have a cash amount attached to them, which pays out in addition to what you will receive from the standard win amount. In addition to this, they will trigger the free spins round, which is the only bonus game included within this game.

The free spins feature activates and takes place on another screen when you land four-pot of gold symbols on reels 1 to 4 and a rainbow mirror symbol on the fifth reel. You will get five free spins, and the only symbols are the pots of gold and the rainbow mirror, both of which become sticky, and can really add up to some big winnings with each subsequent spin.

Even though there is only one bonus feature, Inspired Gaming has tried something a little different with this game, and it is all the more refreshing for it. There is the chance to win big without navigating through several other bonus games, which makes for a smoother and speedier gaming experience.

If you’re looking for treasure at the end of a rainbow, why not try these other slots: Snowflakes, Foxin Wins Again, The Rift or Super Hot Fruits Megaways.