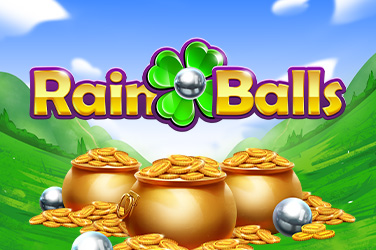 This game is full of colour and surprises. As you spin the wheel, a handful of rainballs fall from above to fill up your screen before it’s time for another round. The animations are really cool too!

The Rain Balls slot game has an impressive design with rolling hills, lush greenery, blue skies all in a cartoon style that will take your breath away! With each turn on the slot machine or spinning at Pachinko area below reels filled by falling rain balls; you’re sure to be entertained as well as rewarded because there’s always something new happening when playing this fun-filled online casino game.

There are many symbols that can appear on the reels of this game. You may see a lucky leprechaun’s hat, golden horseshoe, pipe, beer barrel and hap as well as clovers in various colours with lower paying icons such as balloons or blueberries. The wild is represented by a rainbow which will replace any other symbol to help form winning combinations throughout gameplay!

Rain Balls has a very solid RTP of 96% and is considered as a medium volatility game which means that there can be a steady income of wins while looking for the bigger prizes.

Players can adjust their betting range per spin to start as low as $/€/£0.75 and build all the way up to the maximum bet of $/€/£150.00. This caters for the casual players with a lower budget as well as the high rollers who may want to stake more per spin.

The Rain Balls Slot Game is a sleek and exciting game with many features to unlock as you play. For example, the Pachinko feature allows players to trigger various bonus round including wild reels, extra balls, free spins and the lucky wheel!

The clover icons are one to look out for as they can appear with the metal balls in the middle of the game which can create more winning combos. The wild reel is another great symbol as they can take over a full reel to give players more rewards.

A player may be able to get extra balls in the game which can trigger multiple bonus features if more than one of them hits an active cauldron. Free spins are given to a player if a ball lands into a cauldron, then it is two extra free spins for every time during a feature. The lucky wheel will give players up to a 50x multiplier or a one-off chance at a jackpot offer – small, medium or big.

Rain Balls is a unique slot game that is available on mobile so players can play on the go. This means you can enjoy all the extra bonus features while on the go.