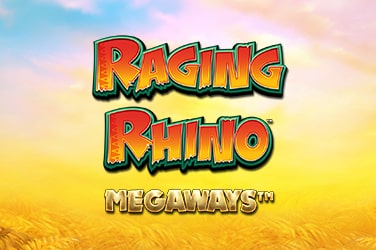 You might recognise this slot from its release in 2015, but Scientific Games has managed to put an original and exciting spin on an already-loved game – Raging Rhino Megaways.

The main difference is its immense high variance, making it perfect for any players who are looking to win big.

This slot makes use of its predecessor’s artwork, because why change what works well? We find ourselves back in the safari, with many recognisable animals acting as symbols on the reels. If you played the original version, you’ll also recognise the stunning sunset and tall grass in the background. You’ll notice no major changes in the visual aspect of this game, however, there has been a modernised uplift to the graphics.

This slot includes 6 reels and 2-7 rows, which have up to an impressive 117,649 Megaways. These reels incorporate 13 symbols, 6 of which are the classic lower-paying royal symbols, 9, 10, J, Q, K, Ace. Alongside these are the premium symbols that players really want to see…rhinos, cheetahs, gorillas, crocodiles and eagles. Your best bet is the rhino, being the highest paying symbol and increasing an original bet by x25 for six rhinos across the reels.

As in all good slots, there is also a wild and a scatter symbol, which in this case are in the form of a safari and a diamond respectively. The wild will act as a substitute for all other symbols.

If you were waiting to hear about the Free Spins feature, here it is. Land 4 or more of the diamond scatter symbols and you’ll activate your free spins. You’ll initially be rewarded with eight spins; however, this feature is retriggered if you manage to land more than 3 scatter symbols during a free spins round. A retrigger gets a further eight spins, but you’ll also activate a multiplier, which will increase by x1 each time you see a winning combo.

Make sure to look out for the Raging Rhino multiplier wild symbol during a free spins round, which can appear on reels 2, 3, 4 or 5. Don’t worry if you’re a lover of the original game – you still have the chance to win your x10 bonus guarantee.

This game is popular amongst all types of players, from avid Raging Rhino lovers to complete beginners. If you’re just starting out, the lowest bet is $0.20, so you don’t have to break to bank to give the game a go. If you’re a bigger better, you can place up to $20 on a first bet. This doesn’t sound like a lot, but if you manage to trigger all those free spins, you could be in for some big winnings.

Raging Rhino Megaways has a fairly standard RTP of 96.18%, however, the high variance makes this game anything but boring. The maximum win is capped at an impressive x10,000, which is more than enough to keep even the most experienced players entertained.

This slot is a great remake of the original game. It manages to keep the theme and excitement of the first, with an improvement on the visuals and a potential win that is not to be missed. Why not signup to CasinoNZ and try your luck?