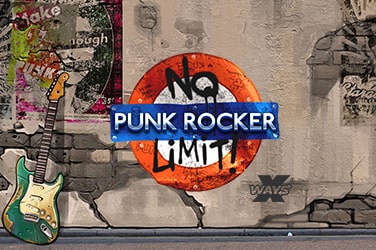 Like the genre of music, it’s based on, the slots game Punk Rocker by No Limit City is different, weird, and extreme in a variety of ways. There aren’t any other games on the market that look and play like Punk Rocker, so if you’re after something a bit different, this is it.

From its unique Punk inspired artwork and some crazy bonuses, this game takes the spirit of disaffected youth and bottles it, making for a fun experience. So will you be a working-class hero, or are you headed for anarchy? Let’s find out.

Punk Rocker is a great looking game, which puts it in good company with the rest of No Limit City’s games, all of which have a distinctive cartoonish art style. A lot of thought has been put into the visuals, and there’s no filler at all, with every element adding to the look and feel. It’s designed to put you in the space of 1970s London, where the thriving punk scene was born, with distinctive British icons that have received punk ‘upgrades’. Graffiti tagged red phone boxes, paint splashed red brick, vandalised Guardsmen and a stylised London Underground sign complete the scene.

The symbols are just as well done, with a punk rock Winston Churchill being the highest value, while a slew of punk items like brass knuckles and steel toe boots make up the lower value symbols. The basic rounds in this game look and sound great, and they pay quite well too, with five reels and 243 ways to win coming in quite nicely when you can get 0.25 to 100 credits in each spin. This all adds up to an RTP of 96.11%

While the base game is interesting enough, the bonuses really throw the cat among the pigeons. All of the bonuses in this game are based around free spins, which both add to your spin count and expand the reels, so you can get a truly shocking number of ways to win if you play your cards right. To activate each bonus you land three or more scatters, a London Underground roundel with the word bonus on it, and you’ll automatically expand the reels to a six reel, 729 ways to win setup.

The scatters you land become moving wilds, a skull with a Molotov cocktail in its mouth, that jump about the reels making combos for you. The number of scatters you initially land dictates how many free spins you get, up to eight. During these spins a number of extra bonuses appear on the reels, granting benefits if you land a combination with them, from extra spins to multipliers for your wins with wilds. One final bonus is the xWays mystery symbol which, when it lands, can collect other examples of the same symbol up to a maximum of 20. If you get that maximum and then land a win with that symbol, you’re looking at a truly epic 46,646 ways to win!

Punk Rocker is just as wild and anarchic as the music genre it represents, with amazing bonuses and crazy extras that can turn the game upside down in seconds. It’s not for the faint-hearted, but you’re guaranteed a wild ride!