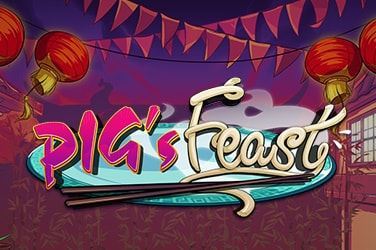 The humble pig is one of the most endearing creatures in nature. It’s a loyal friend, an excellent gardener and farmer, and there are plenty more reasons to adore them! But you don’t have to take our word for it – Eyecon has just launched their Chinese New Year-inspired Pig’s Feast slot game with all kinds of great prizes that will make your day.

The game opens up with a great 5×3 reel layout that works well for the 25 paylines to be conquered. The gameplay itself is filled with glorious, themed symbols, like oranges, dumplings, soup and spring rolls so we feel festive in this new year mood.

The RTP percentage in slot games is something that we always need to be aware of because it affects how much money could potentially be won. The Pig’s Feast game has a solid return to player with 95% and it has a medium volatility which means you should get some small but frequent wins as well!

There are also some big wins that can be landed by players as there is the potential to win 5000x your stake on a single spin. Players can choose how much to stake per spin, ranging from as small as $/€/£0.01 and going up to as much as $/€/£0.50.

Pig’s Feast is a well-crafted game, and you can see that the developers have took a lot of time when designing the slot. Players will feel engrossed by the gameplay and story that is portrayed which means that it’s a very enjoyable experience.

The Firework Bonus is triggered when empty bowls are stacked to the top of the reel, with a laughing pig sharing his fireworks and some multipliers. The male wild symbol can open up free spins for you by landing three on him – 15 free games if he appears alone or 20 in total if there’s two pigs present. Should five appear then 25 bonus rounds await! You may retrigger this as many times possible after 3 more pops out as well – either way it’s time to celebrate with your lucky streak.

Mrs Pig is the scatter in this game and if you land three or more Mrs Pigs, you’ll trigger a dumpling pick feature. Here, players try to win prizes by predicting which of the dumplings will be picked from a lottery machine-like wheel that appears on screen.

Pig’s Feast is a great game with everything that you could want in an online slot. It has a creative and more fun style to it. All those adorable pig friends really bring this happy theme alive without being totally over-the-top. See our welcome bonus section to begin your adventure in the best possible style.