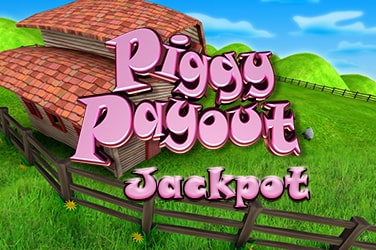 With the launch of their 2016 offering Piggy Payout, they have another fun and entertaining game that has a farm theme running through it.

This game has five reels and three rows set to a background of a farmer’s field and offers a Return to Player ratio of 95% for this medium variance game. The betting range begins at 1c per spin, with the maximum set at $50 per spin, and there is a maximum of 25 paylines, although you could play with just one if you so wish.

There is also an ‘Autoplay’ feature that you can set to automatically spin the reels for you until you either reach the set limit of spins or you cancel the feature. The feature allows you to choose from 10, 20, 50 or 100 consecutive spins, although there isn’t an option for free spins to halt when you reach a certain amount of winnings or losses.

As you would expect with a farm-themed game, the symbols on Piggy Payout are for the most part represented by cartoonish versions of the type of animals you would expect to find on a farm. You can expect to see pigs, sheep, dogs, cows and chickens appear on the reels, with the lower value symbols represented by the playing card symbols Jack to Ace.

The Wild symbol is the windmill icon, and this will substitute all other symbols to form a winning line, except for the games two scatter symbols, represented here by the sheep and pig. Plus, if you do get a winning combination that contains a wild symbol, all winnings for that line will be automatically doubled.

As you would expect with a slot game from the designers at Eyecon, Piggy Payout is not low on bonus features. As an example, landing three sheep scatter symbols sends you to a mini-game that allows you to uncover multipliers with values up to and including 100x your unit bet.

But of course, a game called Piggy Payout places the pigs at the top of the pile and landing three pig symbols will reward you with 5 free spins, whereas landing 4 or 5 will give you 10 and 15 free goes, respectively.

This game also includes a feature that allows you the option of gambling your winnings if you are brave enough. This feature can be selected after any winning combination lands on the reels, and when activated it will give you two options, a white cow or a black cow. Picking the correct one will double your winnings but pick the wrong one and you will lose your winnings. This can be repeated up to five times if you are feeling particularly lucky.

This is certainly a different type of slot game from the norm, and Eyecon have put together a fun game that has excellent 3D graphics and plenty of features and chances to win huge sums of money via the free spins and multiplier bonus games.