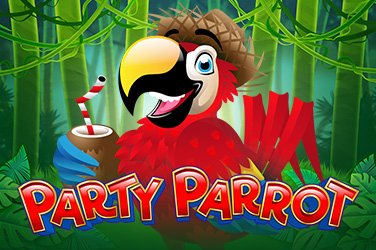 Are you ready for some laid back vibes and party tunes? Pete the Parrot doesn’t ruffle any feathers and he’s got his friends over for a little jungle shindig, where there’s also a load of cash to be won. But while Party Parrot may be a little laid back for some, the bonus rounds are where the action really heats up, with some surprise gifts from our host.

So will you be the soul of the party or a party pooper? Let’s find out in our Party Parrot review.

Party Parrot really buys into its jungle setting, with the reels being surrounded by looming trees and trailing vines. This slot is all about colour and life, which you get in abundance with the low and high value symbols. While the low icons are the generic 9 – A symbols, given a colourful party makeover, the high value symbols are represented by all of Pete’s friends: A cockatoo, a pelican, a flamingo and a fellow parrot wearing a beer hat. The graphics and animations do a good job of capturing a party atmosphere, and whether it’s the bright colours, the bouncy tunes or the random birds and balloons that fly across the screen, there’s always something happening.

The game is less exciting in the mechanics, though that doesn’t mean it has no tricks up its sleeve. It’s a five reel, three row slot with 25 paylines to choose from, and a betting range between £/€/$0.25 and £/€/$62.50 that you’ll have fun wagering with. With a max payout of 1,800x your stake and an RTP of 93.74% you’ll probably need to hit up the bonuses to win big. There’s also a transforming wild in place, which looks like a colourful collection of parrots, and does different things depending on where it lands. On the middle row or the middle three reels it is just a normal wild that replaces other symbols, whereas if it lands touching the edge of the reels anywhere it will expand across the whole reel to the other side and stick for a spin.

Even eggs get in on the party in this game, and as they’re also the scatter it pays to have them around. Land between three and five scatters to get up to 20 free spins, which are fun enough without the sticky wilds on top, which stick in place when you use them to land a combo. They then stay there for the rest of the bonus game, so you can keep forming wins with them!

The Party Parrot slot game is a fun, vibrant and colourful slot that gets full marks in terms of presentation. It’s bright and well made, with highly detailed symbols and a fun party soundtrack, but the payouts in the base game can leave a little to be desired. This can be fixed with a good run of free spins and a generous helping of sticky wilds, but there’s not much chance of getting rich in the base game alone.