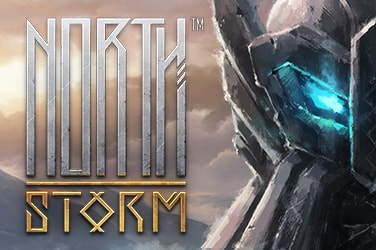 Set against a background of snow-capped mountains and a statue of a Norse God, North Storm is a visual treat.

The gameplay is smooth and straightforward, making the game accessible to new players but also interesting for seasoned slot fans. North Storm is an immersive slot with high-quality graphics and an interesting theme.

In 2014, Microgaming entered into an innovative partnership with Rabcat, an interactive casino game manufacturer. The two companies have produced many slot titles together, including the North Storm slot.

The partnership between Microgaming and Rabcat is perhaps so successful as the two companies are both considered online casino pioneers. Rabcat regularly pushes boundaries and have forged a stellar reputation within the international iGaming industry. Rabcat effortlessly combines quality with creativity for every video slot, online table game and 3D-game they proudly release.

The 5 reel, 25 payline slot is themed around Norse Gods and storm-related images. The slot features heavy blocks of stone instead of standard symbol graphics which drop into position with a satisfying bang. On the stones, the classic card A to 10 symbols are engraved in a rune style, alongside 3 Norse signs. The highest value symbol pays players between 2 – 100x their original stake, depending on whether 3, 4 or 5 fall on the pay line. A wolf symbol is a wild, which can substitute all symbols on the reels, excluding the free spin symbol.

The free spin bonus round will be triggered when 3 or more free spin symbols fall in a sequence on the reels. 3 symbols will automatically unlock 8 free spins and 3 more spins will be given to the player per additional free spin symbol.

The North Storm slot has an RTP of 96.13% which is a medium-high average compared to similar slots. The game can be played at a minimum of $0.25 and a maximum of $50 per spin, this makes the game ideal for slot beginners and seasoned online casino pros. As you would expect from such innovative and forward-thinking companies of Microgaming and Rabcat, the game has been optimised for tablet, mobile and desktop use. This ensures players can enjoy North Storm on-the-go or from the comfort of their home and receive the same high-quality gaming experience.

This slot has proved yet again the success of the partnership between Rabcat and Microgaming, who have created another online casino slot game that pushes boundaries without being too alienating or confusing. All in all, this slot is not to be missed and will undoubtedly be a big hit in the online casino world.