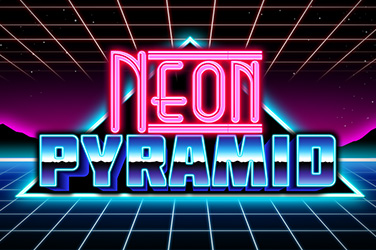 There are so many similar styled pokies out there that anything a bit different immediately gets us to sit up and notice, and Neon Pyramid is definitely that! Part 80s digital extravaganza, part nightclub laser show, Neon Pyramid is painfully cool and distinctive thanks to the excellent design work on display. The differences don’t end there though, because there are some surprises in the mechanics too, but will this game be a retro classic or just plain old fashioned? Let’s find out in our Neon Pyramid slot game review.

If you’re a fan of the cyberpunk type aesthetic that got really big in the 1980s then you’ll love Neon Pyramid. The 1980s references don’t stop there however, and the high value symbols include synthesizers, boomboxes, wedge shaped cars, sunglasses and cassette tapes. The low value symbols are standard card suits, but every symbol looks fantastic picked out in different coloured neon lights as if you’re on the Miami shore. The background is of a Tron style laser grid, above which rises a huge black pyramid with an all seeing eye on top, so the game is packed with sinister looking symbolism like an 80s concept album. With arcade game references as some cool synth music thrown in for good measure, this slot is the dictionary definition of a retro classic.

There are all sorts of interesting things going on in the mechanics, so we should start with the layout, which starts off with six reels and four rows – one each more than is usual. This means you get an awesome 4096 ways to win, which means the wins will come thick and fast as you play. The wins aren’t enormous in the main game, with a top prize of 32x your wager, but this is a high variance game so in reality you’re playing for that top prize of 10,000x your stake! The RTP is a hair below average at 95.85%, which isn’t half bad for a high variance pokie!

There are a couple of bonuses in the Neon Pyramid slot game, including one that holds the key to that big 10k payout, starting with the expanding wilds. These are massive arcade machines that take over whole reels and help complete combos, while also paying out 3x the value of the win too. A second bonus is unlocked by landing up to six of the pyramid bonus symbols, which grants you free spins with a wild multiplier from 5x to 10x whenever the wilds land. You can upgrade your multiplier by landing more bonus symbols until you hit the max of 10x, at which point you also get two fully wild reels during your spins to help build bigger wins!

Neon Pyramid is a great looking game that looks like nothing we’ve ever seen before, and it’s not too cheap with the prizes either, though it can be tricky to hit the big numbers in the main game. Luckily there’s a super generous bonus to help you top up your wins, which can see you win 10,000x your wager!