Napoleon - Rise of an Empire Slot 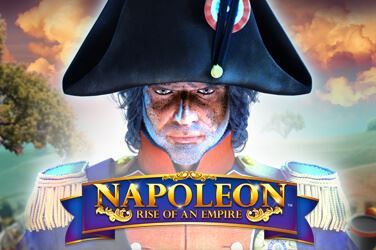 If you like your slots games to have a historic angle, then Blueprint Gaming’s 19th century-based game Napoleon – Rise of an Empire will certainly appeal to you.

The game designers at Blueprint Gaming have certainly excelled themselves with the detail in this game, and it works just as smoothly on mobile devices as it does at home on a PC.

This game offers 20 fixed paylines across five reels and three rows, and gives a Return to Player ratio of 95.96% for this medium variance game, with the minimum stake set at 20c per spin, or you could plump for the maximum bet of $40 per spin.

Visually, the reels are set to a background that depicts one of the many battlefields that came about as a result of Napoleon’s march across mainland Europe, and the reels themselves are surrounded by a solid gold frame.

As with many slots games, the lower value symbols are represented by the playing card icons, this time ranging from 9 to A, and if you land five 9s or 10s you will receive 4 times your unit stake, which is pretty good for a lower value symbol. Jack and Queen symbols will pay 8 times your bet for five in a payline, whilst Kings and Aces will return 16 times your stake for five.

The higher value symbols are represented by those battlefield staples, cannons, horses, a redcoat soldier or a warship. The cannon symbol returns winnings of 24x your stake for five on a payline, the horse giving 32x, the ship 80x and the soldier 200x for landing five on a payline.

There is certainly the chance for some big wins just on the base game, but it doesn’t end there, as Blueprint Gaming have included one extra feature on the base game. If you have wild symbols (represented by Napoleon himself) forming part of a winning combination, you will receive a bonus multiplier that will double your winnings should you land one wild symbol, with the multiplier doubling with each extra wild symbol you get. Therefore, if you land a soldier symbol and four wilds your winnings will be multiplied by 3200x your unit stake. However, land five wild symbols on a payline and you will receive the top prize of 5000x your stake, and this can even be doubled should you land five wilds during one of the free spin rounds.

Landing 3 of the scatter symbols will trigger the free spins round where you will get 10 free goes. If Napoleon shouts ‘attack’ you will also get either a bonus modifier that gives extra scatter symbols on the middle reels or extra wilds on all reels.

Blueprint Gaming has delivered a nice looking and sounding game that offers some huge wins even on the base game and is definitely a game that you should take a look at.

Why not conquer a few of our other slots like Somthing Fruity, Fruity Paydays, Egyptian Pays or Battle Maidens Cleopatra.