Home » Netent » Mercy of the Gods

Mercy of the Gods Slot Review 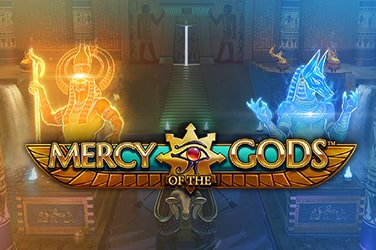 NetEnt is back again with another jackpot slot – Mercy of the Gods.

Featuring Egyptian Gods that many will recognise and a well-done Egyptian theme, players can join an archaeologist on her venture for treasure – or in your case, winnings.

Mercy of the Gods is a fairly standard 5-reel slot and has 20 different paylines. The reels are located at the entrance of a classic Egyptian pyramid before the protagonist is about to begin their explorations.

There are the usual symbols – J, Q, K, Ace as well as some well-known topical figures in the form of Horus falcons, scarabs and Tutankhamen. We’ve already mentioned the archaeologist, but she is, in fact, the highest paying symbol, and can offer 80 times your original stake if you manage to get 5 symbols on a payline.

You should also look out for the wild symbol, which can replace all symbols other than the scatter, and the bonus symbol that can trigger the jackpot game. (more on this later!)

If you’re lucky enough to land more than one wild symbol during the base game, you can trigger the “Gift of Life Re-Spins.” This means that each wild moves down a row when you respin, continuing until the wilds have all disappeared. More wilds equal more respins, and higher chances of winning each time!

If this isn’t enough, if you see a second wild symbol land, you’ll be rewarded with a wild reel, meaning you’ve managed to reactivate the respins feature, rewarding you for a second time.

As well as respins, Mercy of the Gods also offers free spins if you see 3, 4 or 5 Eye of Horus symbols. You will then gain 5, 8, or 12 free spins respectively. You can also trigger the wild reel here if any wild lands while this feature is being played.

And now what everyone has been waiting to hear about – the big jackpot feature. During either the base game or the respins feature, you might manage to collect 3 or more of the bonus symbols. If this is the case, you’ll be awarded a set of blank reels (other than the bonus symbols) plus 3 extra spins.

The aim of the jackpot feature is to fill as many rows with bonus symbols as possible. One row rewards you with the Minor Jackpot, which is 20x your original stake, plus whatever cash prizes you have won through the additional bonus symbols (which are randomly valued between 10 and 200 times the bet).

Two rows get you 100 times your bet, also known as the Major Jackpot.

But what you’re really hoping for is three rows and Mercy of the Gods’ biggest payout, which is their progressive jackpot. This means that until someone wins, it will only keep growing. If you let your imagination run wild, you’ll agree that this could result in some pretty big wins.

With an RTP of 96.6%, the returns are fairly standard, but this game has the added bonus of the above jackpots. Payouts are big in size but can be less frequent than other NetEnt games.

With a thrilling theme and a storyline that will interest many players, Mercy of the Gods is a great gaming experience. The visual effects are very mesmerising, with an appropriate soundtrack to add to the vibe. The potential jackpots are enough to offer suspense and excitement to both old-timers and newbies, so why not head to CasinoNZ and give it a try?