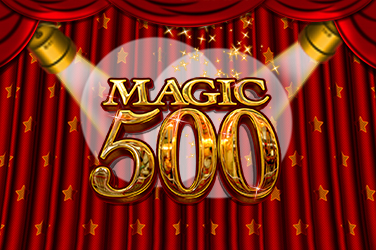 Stage magicians with their flashy tricks and magical powers are the stars of this game. In Magic 500, you can join them in a race to make as much money from your magic show as possible!

Be drawn in by the magical visuals and sound effects but stay for the cash rewards available in this fresh idea from Core Gaming. Read on for more information on Magic 500.

Magic is a common feature in genres of slot games and Magic 500 has hit the nail on the head with its visual features. Running off a 6-row, 4-reel layout on top of an old fashioned, wooden stage under spotlights with red curtains and a female magician on stage adding some magic to the symbols. The symbols themselves consist of standard low value 9 – A card suits with magical makeover whilst the higher value symbols are all the stapes of stage magic like doves, a deck of cards and the magician herself. There is also a Bonus and Wild symbol that substitutes for other symbols to help create winning combinations, and a 3rd mystery symbol will turn into any symbol that will guarantee a win no matter where it lands.

The best kind of magic is one that appears to be so simple. The graphics are nothing fancy, but there’s always something going on with the soundtrack and bells ringing at every trick you pull off or when someone in an invisible audience claps as symbols appear The animations in Magic 500 are great with disappearing symbols and flying cards to flocks of doves appearing for a hat there is a lot to enjoy in this slot.

The mechanics involved in Magic 500 other than the 6×4 reels mentioned earlier include a cascading reel feature that replaces winning symbols with new ones providing the opportunity for endless wins. The paylines go all ways in Magic 500 providing up to 4096 ways to make a combination that can lead to thick and fast payouts explaining an RTP (Return to Player) of 96.1%.

The combination of cascading reels and a free spins bonus lead to a well themed, clever little round. Land more than 3 bonus symbols to receive 8-12 free spins, if a cascade win is landed during the free spins then the magician will produce a trick from her top hat producing gifts for players. Awarded at random these can be random cash prizes, Wilds, free spins and multipliers. There’s more, a random progressive jackpot could award players any amount depending on how much is being paid in.

Magic 500 is entertaining, there is no doubt about that. The wins seem to be exciting and the animations keep the gameplay fresh and enjoyable.

Head over to our slots page, a catalogue of games with everything you need including releases from Core Gaming like Witch Doctor Goes Wild and Cashzuma and the tomb of wonga.