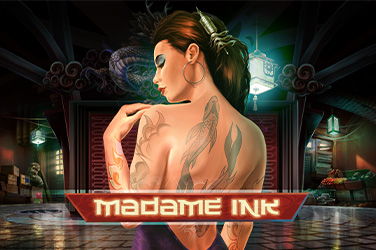 Whether it’s a beautiful depiction of a long admired image or symbol, or a drunken mistake in a place you’d rather not mention, tattoos are everywhere these days. It’s not just bouncers and merchant seamen who have them either, but people from all walks of life are getting inked up, and there are a few slots out there celebrating the artistry behind them. Madame Ink is the latest of these from veteran developers Play N’ Go, but will this game give you an experience that will stay with you or will you regret it when you’re older? Let’s find out in our Madame Ink slot game review.

Unlike many of the other tattoo related pokies out there, Madame Ink doesn’t focus too much on the grungier side of alternative culture or punk, but on the skill and artistry that goes into designing and executing tattoo art. Set in an elite tattoo studio in Hong Kong, the kind that’s invitation only for only the best connected people, the background to the reels is an out of the way alley filled with boxes, fluorescent lights and fresh fruit. But don’t be fooled, because there’s more to this alley than meets the eye. Stylised versions of the card suits make up the low value symbols, while gorgeous and colourful representations of traditional Asian motifs like dragons, storks, lions and Thai demon masks.

The mechanics of the Madame Ink slot game are fairly traditional, using a three reel and five row layout with an exciting 243 ways to win element that means you’ll be getting lots of wins coming your way. You can bet a maximum of £/€/$100 per spin, but the top paying symbol only delivers 5x your stake, so don’t expect to be able to retire on your winnings from the main game. Having said that, the RTP of 96.2% shows that there is definitely cash to be won somewhere.

There are a few nice little bonuses to remember in Madame Ink. For a start, any wild has the chance to become an expanding wild that converts all the other symbols on the reel to wilds that pay the top possible value when they’re part of a win. There is also a mystery symbol that can randomly take over the middle reel, filling it with the same high value symbol that can then form valuable wins. On top of these bonuses you also get a free spins round, activated when three or more of the snake scatters land, giving you a choice between three game modes: 12 spins with the expanding wilds active, 6 spins with the mystery symbols activated or three spins with both. There’s an element of risk in each choice, but it’s really a dilemma between going for broke or trying to build a kitty.

Madame Ink indeed looks excellent thanks to its gorgeous use of tattoo art throughout the game, and while the main game isn’t very generous, there are plenty of opportunities to make a bit extra in the bonus rounds. We love the chance to choose which game you want to play. Always a great feature in a pokie, so your destiny is in your hands!

If you need a title that can become a permanent place to play, then look no further than Dawn of Egypt, Bakers Treat, Cash Vandal and Demon.