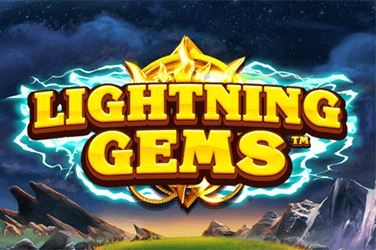 Prepare for a thrilling adventure set in outer space, as you go on an epic quest to capture the lightning gems. The game Lightning Gems by NextGen Gaming seems like the stuff of dreams: not only can rubies, sapphires and emeralds be found above ground but also falling from the sky.

Although its not all collecting extra terrestrial gems with ease, whilst some gems are sparkly, others can be sparky, hence the name.

The effort that has went into every aspect of this game including the Dungeons and Dragons themed logo and fast paced soundtrack has been done to set the narrative perfectly. After all roaming a planet in search of electrified gems is not an ordinary experience. The Lightning Gems slot game is like stepping into a world of wonder. The background features an alien landscape, and symbols include sparkling gems with vibrant power that seem to emanate from within them.

The Lightning Gems slot game is truly a sight to behold. The stones are shiny, and the background has an artistic touch with lightning zapping across the screen in time with each winning combo. There’s even exciting animations that bring this experience to life, as symbols fly into place from off of the screen.

Whilst the main game can be tremendous fun and a spectacle to behold with the flashes and sparkles as combinations are made on the reels. It could be said that the real exciting part of the game is the bonus rounds. Although the game itself lacks variety in some parts, the high betting limits set at £/€/$150 can be very rewarding in the main game and are part of what makes this slot so popular.

Another great feature of Lightning Gems is the stacked wilds available; these take the form of an alien-like golden symbol with a planet in the centre. These can help you in game by appearing and taking over entire reels thus rewarding bigger and better wins. There is also the possibility of gaining extra wilds at random with electric jolts hitting the reels. All of these features along with the RTP (Return to Player) of 95.4% which can be increased through high bets and bonuses.

The Lightning Gems bonus round is a fantastic addition to the game, adding more variety and keeping things from feeling too repetitive. To begin there is an opportunity for free spins on Lightning Gems which can be claimed by landing 3 of the blue gems surrounded by floating rocks. When this happens you will be rewarded with 10 free spins, these are then boosted by wilds which can reach 50 on each spin.

This electrifying slot really takes you on an adventure across the galaxy and with some rewarding wins available to players. If you would be interested in playing more slot games visit our slot game page with big game include NextGen gaming’s very own King Kong Fury