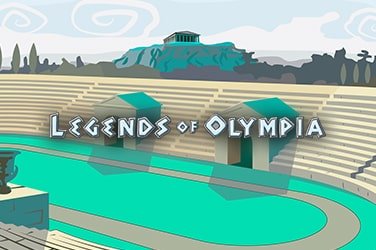 Players will be transported back to Ancient Greece when they play this Legends of Olympia slot from Genii, as they compete at the very first edition of the Olympic Games!

Naturally, this Legends of Olympia slot game will instantly appeal to players at CasinoNZ because it takes inspiration from one of the world’s biggest and most famous sporting events ever: the Olympic Games.

Whilst the Games are a serious business for those who continue to compete regularly, players will find that Genii has made this fun and laidback with the visuals.

The themes are drawn in an enjoyable way, with players finding themselves at the Olympic Stadium in Ancient Greece, where they will get ready to compete against each other without having all the pressure on their shoulders as the athletes would have.

Genii has made this game extremely easy to enjoy and play, as the Legends of Olympia slot features a playing grid that consists of 5 reels and 3 rows. Punters will also find 50 fixed paylines available to land the available symbols on the paytable and form winning combinations.

Concerning the symbols, each of these fits the theme adopted expertly, as players will be able to find an urn, a bronze medal, a silver medal, a gold medal, the Olympic Stadium, a long jumper, a runner, a boxer, a charioteer, a javelin thrower, and a discus thrower.

A couple of special icons are available in this Legends of Olympia slot. However, we recommend checking out the bonus features to find out what they are and how they can make this game as rewarding as winning an Olympic event can feel.

As mentioned, a couple of symbols can help trigger some of the Legends of Olympia bonus features.

The first is the two wild icons that can be found, with both male and female torchbearers available. The male will only appear on reel 2, whereas the female will only land on reel 4. Nonetheless, if they appear and contribute to a winning sequence, they will expand to fill the entire reel.

The free spins game that can be triggered is perhaps the biggest of the Legends of Olympia bonus features available.

This game requires players to land 3 or more of the laurel wreaths, as these are the game’s scatter icons. Players who land 3 of these will receive 10 free spins, whilst 4 and 5 of these icons will provide 15 and 20 free spins, respectively.

Furthermore, when playing this Legends of Olympia bonus feature, gamers will notice that any recorded win will provide them with a 2x win multiplier! Additionally, three or more scatters appearing will instantly re-trigger the bonus game.

The return to player (RTP) rate for this Legends of Olympia slot game is around 96.3%; however, this is an educated estimate as Genii does not always make a habit of posting this figure publicly.

If you love your sporting history and want to play a game that takes inspiration from one of the biggest events to have ever happened, then this Legends of Olympia slot will come highly recommended!

The two wilds and the free spins game are exceptional features and can help make this game as rewarding as winning a gold medal at the Olympic Games – at least, in our opinion!

If you like the Legends of Olympia slot game, why not try Rise of Olympus or Legends of Greece?