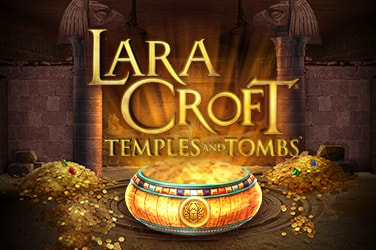 Intrepid adventurer Lara Croft and the Tomb Raider franchise have already been the inspiration for two Microgaming-powered slots titles. Still, the gaming giant has returned to the theme for this latest take, which benefits from more modern game mechanics and graphical style.

The basic game is played over five reels and has 243 paylines. It is playable from as little as $/€/£0.2 per spin up to $/€/£20 per spin and is based on a familiar theme of solving puzzles and overcoming obstacles to reveal hidden secrets and treasure. It is set against the Temple of Riches backdrop, with symbols including bags, grappling hooks, torches and water bottles.

The alligator god Sobek also makes an appearance, or at least, his golden head does, and we see Lara Croft in various situations, with the most lucrative symbol being the straightforward portrait, which offers a multiplier of x50 for your stake if you can bring up five of the symbols on a payline.

The game has a solid RPT of 96.55% and is great to look at, with slick graphics and a suitably mysterious and tense soundtrack, and the Rolling Reels mechanic boosts the gameplay. This popular gameplay feature sees symbols fall from the top of the screen, and when there is a winning combination, the symbols are replaced with new ones, opening the way for continuous wins. Each win increases the multiplier level up to x5.

The game features a handy Free Spins bonus which is launched if you can line up three or more of the Book of Secrets Scatter icons across the reels. This will reward you with up to 32 free spins, and with each consecutive win, the multiplier will go up from x3 to x15. It is also possible to retrigger this Free Spin feature, landing you another eight free spins, with 48 additional spins on offer, for a theoretical total of 80 free spins.

The Jackpot feature may also attract fans of slots gaming. As you play the game, Wild icons are gathered, which can ultimately boost your chances of launching a jackpot win. There are three jackpots on offer, titled Minor, Major and Grand, and these are worth a reward of x15, x100 and x5,000 of your stake, which can lead to some hefty wins.

Temples and Tombs is a high variance game that can offer a theoretical payout of x7,343 thanks to the Free Spin feature and the various multipliers. The three fixed Jackpots further boost the winning potential of this title. The game is a clear improvement from its predecessors because the graphics and sound are far more impressive. At the same time, the Rolling Reels feature combined with multipliers has the feel of Gonzo’s Quest, another popular modern title. Overall, this game represents the best take yet on the Tomb Raider franchise and is a worthy addition to the annals of Lara Croft.