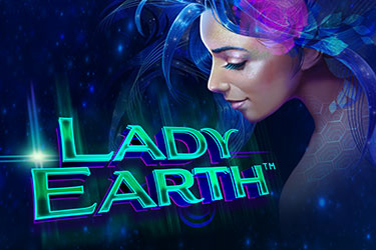 It’s time. Get ready to take a trip through space and maybe even your inner thoughts with the slot game Lady Earth! What are you waiting for? There’s a pretty spaced-out theme on offer in this slot game, which combines out of this world visuals with some traditional elemental symbols combined with the signs of the Zodiac to make an exciting mash-up that will definitely relax you while also hopefully winning you some cash.

But is Lady Earth really what it seems or just here for one visit before coming back down from outer space? Let’s find out by taking a closer look at our review below! You can also try Lady Earth for free right here at CasinoNZ using our demo feature!

The Lady Earth slot machine is a sci-fi themed game with the most beautiful background that we’ve ever seen. A glittering starscape complements Gaia’s ethereal presence and an assortment of glimmering gems add to this world for slot players who don’t want ‘simple.’

The symbols themselves are an intricate combination of elemental and Zodiac signs like earth, air, and fire as well as the rabbit, fish, or scorpion. There’s a suitably space age soundtrack in the background while accompanying your winning combinations with jingly sounds effects and flashy animations that make you feel triumphant!

Lady Earth will sweep you away with its immersive gameplay and dynamic graphics. With a massive playing area, five reels, 51 pay lines, and high betting limits of £/€/$300 per spin there’s plenty of room for victory!

Lady Earth is an awe-inspiring game that rewards players handsomely when they manage to land the big wins it offers. The expansive 5×5 reel layout fills your screen with more opportunities than ever before–and at higher stakes too!

The symbols themselves don’t pay all that well, with fire and water paying the most at just 2.75x your stake for five; however, this still adds up to a lot if you’re playing near the maximum! The RTP is nice and high at 96.8% which means there’s no need to worry about getting short changed!

The Lady Earth slot game provides most of its rewards in the main game, but there are still a few bonuses for those who like their variety. One bonus is called “Re-spin,” which can land on any winning spin and holds all the other reels while winning symbols individually generate another win with one randomly chosen symbol.

The symbols that are already on the reels can be added to each other for free during a spin. The second bonus is an engaging multilayer pick and win game where players have nine choices with prizes, multipliers, coins, and skulls underneath them. Players collect four of these in order to move onto another layer or three if they want to leave the bonus round altogether depending on their luck.

Lady Earth is a cosmic slot with big betting limits and an even bigger playing area. It’s the kind of game you can play for hours without knowing where your next win will come from, but that feeling might be worth it if Lady Earth does bring home some major gains!