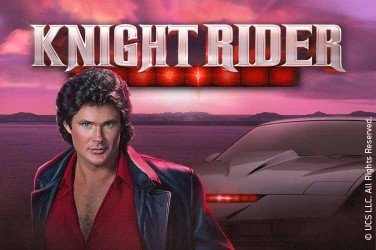 With a huge array of different bonus features available, it is hardly a surprise that so many want to hang out with Michael Knight and K.I.T.T. once again in this Knight Rider slot game at CasinoNZ!

NetEnt has provided players with several amazing themed games, with Knight Rider just one of those fantastic slots to have been created and made available at CasinoNZ!

Fans will instantly recognise many of the unique themes and visuals to have been created, as they will immediately be able to immerse themselves into the gameplay. The use of the iconic soundtrack and the regularity in which David Hasselhoff’s character – Michael Knight – and his car – K.I.T.T. – appear to reinforce the familiarity!

This Knight Rider slot game has been made incredibly simple to enjoy, as players will be met with a grid that consists of a 5×4 formation! As a result, there are 26 paylines in which a winning combination can appear!

Regarding the symbols utilised, the paytable features a handful of objects which are instantly recognisable from the TV series. Although the standard playing card icons – 10, J, Q, K, and A – appear, these are followed by a watch, a remote control, a lorry, K.I.T.T., and Michael Knight!

There is a couple of Knight Rider bonus features available within this slot, as NetEnt has ensured lovers of the classic TV show fall in love with this game in the same way!

The first that may be found is via the use of the ‘Walking Wilds’ and the ‘Turbo Boosts’ that have been made available to trigger.

When the game is being played, players will find that there are walking multiplier wilds that can appear. If these are used to form a win, they will move one position to the right for the next spin, with the multiplier increasing with each use!

The ‘Turbo Boost’ that can be triggered happens randomly. When it does, 3 or 4 multiplier wilds will be added to the playing grid, thus improving the chances of winning a potentially lucrative prize!

One of the final Knight Rider bonuses implemented into this game is the ‘Knight Rider Free Spins’ round. This game will be triggered when players are fortunate enough to land three scatters on the middle reels (2, 3, and 4). If they do this, 10 Knight Rider free spins will be awarded.

Additionally, up to 3 waling multiplier wilds will be added to the reels with each spin, whilst players can collect Knight symbols. Those who collect 3 of these will then level up and be awarded even more free spins!

NetEnt has provided a return to player (RTP) rate of 96.07% for this Knight Rider slot game, combining it with a high volatility level.

Naturally, if you were a huge fan of the Hoff and loved his Knight Rider TV show, you will instantly love this NetEnt title! The Knight Rider bonus features make things very interesting and allow gamers to enjoy some rather lucrative rewards!

If you like the Knight Rider slot game, why not try Jumanji or Game of Thrones?!