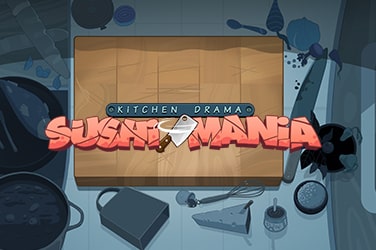 Foodie slot games are all the rage these days, and it’s no surprise that veteran slot developer NoLimit City has released another. This time around players can feast their eyes on a selection of delicious snacks while they spin away to potentially win big!

We’re going to be honest with you, Kitchen Drama Sushi Mania is a game that we really enjoyed. It was cute and had some interesting features for the player, but it didn’t offer much of anything in terms of gameplay. The graphics were stylized perfectly for this type of cooking experience while still being easy enough on your eyes, if you’re someone who enjoys nice graphics, this is a slot for you. Try this slot for free right here at CasinoNZ!

Kitchen Drama is a quirky new Swedish game that takes Japanese cuisine and turns it into an exciting experience. The design of the vegetables, like big watery eyes with little faces on them, make you think twice about cutting up your food before cooking or feeding yourself! Rice balls, sushi rolls, pots of wasabi sauce all lay waiting for hungry gamers to eat their fill without ever having stepped inside Tokyo’s lively restaurants themselves.

The music that accompanies this app is soothing to the ears and can be enjoyed by anyone. The animations are colourful and playful as well so it’s a joy for all ages!

Unlike some other NoLimit City slots, such as Piggy Bankin’ and Feed the Dragon Slots, Kitchen Drama Sushi Mania uses a cascading reels mechanic in which winning combinations are removed to be replaced with new symbols that fall from above. This effectively gives you free spins after each consecutive win by giving your next spin more possibilities than what there were before.

The 5×3 reel layout is one that has never let an online gambler down, with 20 pay lines to choose from. The top payout of £/€/$100,000 in a single spin will make any player feel like they’re living the dream and for high rollers the maximum bet at £/€/$100 per line may be just what you’re looking for.

You will be surprised and delighted by the Bunshin wilds feature in Kitchen Drama Sushi Mania, activating when you land one of the little blue symbols dressed as a ninja pops up. More of these wilds win drop in from the top to replace other symbols on your reels, potentially generating some tasty wins.

The other two games are represented by the features on either side of the reels. To your left is a meter that shows which symbols you need to land to activate this game, after which you receive 10 free spins with added sushi wilds. On the right-hand side of the screen is another meter that must be filled up three consecutive times before activating an extra spin where there will also be sushi wilds onscreen!

Who doesn’t love a good old kitchen drama? Sushi Mania is the perfect game for you if that’s what turns your crank. The visuals are great and really bring this wacky, fun theme to life in style! But don’t let that fool you – there are some nice wins up for grabs as well!