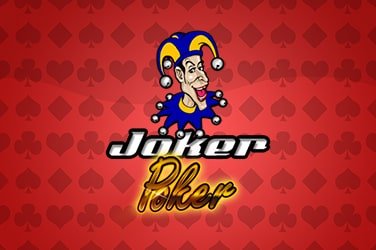 A few years ago, when this game was released, it entered a very populated market of online casino games. Still, since that time, many people have moved on from Video Poker and have turned their attention to other games. For that reason, and the fact it is a sad reality, we recommend you try out games such as this one, Joker Poker, instead of joining the crowd and going straight for Slots.

If you learn how to play this game and get involved, it is a straightforward but exciting game and this specific variant of the game allows you to get some decent rewards.

Upon loading the game, you will see that a yellow and pink city covers the games background. The cards used in this game are your standard set of cards, but the one thing that stands out here compared to other card games is that the Joker cards are actually needed. The soundtrack and sound effects are very subtle in this game, which could be a negative factor for some people, but the game is exciting enough not to be affected by it.

We’ll start with the symbols before moving on to the rest of the game’s material. The conventional card symbols will appear the most commonly in this game, with the lowest valued symbol in Double Bonus Poker being a 2. The values gradually increase until they reach a maximum of ten. Following the number ten, the ranks progress through Jack, Queen, King, and ultimately Ace.

You will always have 5 cards in your hand throughout a ’round,’ and your main goal is to have a higher valued hand than the Dealer. You can keep your cards if you are certain that your hand is worth more than theirs, but if you have a low-valued hand and believe you need to enhance its value, you can twist to receive some new cards.

There are no direct bonuses in this game, as it is not a slot, so it is a bit more difficult to include a bonus round. It does have an extra feature known as the Gamble function, from which you can gamble half or all of your winnings on a game of higher or lower. This game returns double or nothing, or can return the stake if the two cards have the same value.

The Gamble feature in this game is an interesting addition and is quite unique. The game itself is designed very simply which is a bonus for a lot of people. If a game becomes too confusing with its design, some people lose interest, but that will not be an issue here! Joker Poker is a great addition to our portfolio and the game is exciting and has a decent promise of reward.