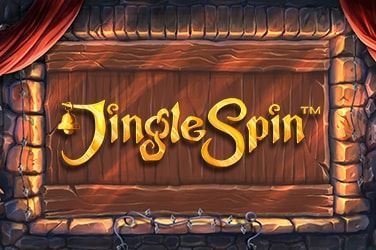 Jingle Spin is another festively themed slot from NetEnt, perfect for playing over the winter holidays. If you’re looking for a slot with a classic Christmas theme but features that are a little bit more interesting than the usual ‘free spins triggered by Scatters’ round, look no further.

There’s a lot to enjoy in Jingle Spin, a quirky Christmas slot.

Jingle Spin is a 20 pay lines slot in which players line up matching festive symbols, including baubles, pinecones, and reindeer to win prizes on the reels. The reels themselves are framed by five little elves, and Santa himself, who can be seen to the right of the reels operating a lever. The highest paying symbol in the slot is the red bauble, which pays out between 30x and 1000x the bet for between three and five symbols on a pay line, while the pinecone pays between 10x and 300x the bet and lower value A to 10 symbols pay up to 75x or 50x the bet for five on a line.

This is where Jingle Spin really stands out. Instead of featured triggered by Scatters on the reels, instead special featured are triggered by the five elves which sit atop the reels, who hold feature baubles which are randomly activated when Wilds appear on the reels below. Feature baubles can trigger bonuses including up to 50 free spins, spreading Wild symbols which spread across the reels, and instant coin wins. This is a great way of triggering features, because not only does it mean they trigger fairly regularly, but it also means you get little ‘gifts’ every so often in Jingle Spin – perfect for Christmas.

If you’re looking for a mobile slot to play on the go, Jingle Spin is a great choice. You can play it from any device, including both iOS and Android smartphones and tablets, and as long as your internet connection is fast, the game should load quickly and run smoothly.

With an average return to player of 96.48%, Jingle Spin is the gift from NetEnt that keeps on giving. This is a good return, meaning that on average players will win back around $96.48 for every $100 they spend on the reels. It’s also a medium variance slot, which means wins come in fairly frequently and the style of play should be balanced and accessible for most players.

Jingle Spin is a refreshingly different Christmas slot which does away with the usual formulas. Everything from the design of the slot down to the gameplay is interesting, and the way features trigger when wilds land on the reels means nice surprises always come in twos; it’s also boasting a pretty strong RTP which means most slots won’t offer better returns than this one. If you’re intrigued, we’d recommend you give this slot a try next time you’re feeling festive: you won’t be disappointed.