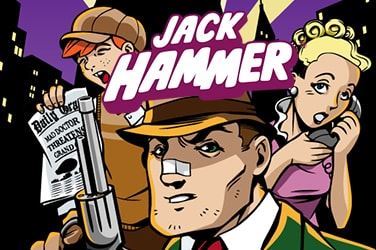 NetEnt has been producing quality online slot games for 20 years now, and with this 2011 release of Jack Hammer ™, they have gone for a comic book themed slots game that is a homage to those old-style black and white movies of the 50s.

The game is set in the fictional Grand City, with our eponymous hero Jack Hammer ™ seeking to prevent the evil Dr Wuten from destroying the city with his bombs that are laden with poisonous gas.

The designers have given this game the look and feel of a comic book from the 1950s and 60s. The five reels are set to a background of a cartoon cityscape, with the reels themselves packed with cartoon characters.

The Return to Player on this game is at the high end of average for this type of game and comes in at 96.96%, and with a fixed amount of 25 pay lines. The minimum bet, therefore, is 25p per spin, with the high limit set to $250 for this low volatility game. The jackpot stands at 750,000 coins, which will certainly appeal to high rollers and casual gamblers alike.

The designers of this game obviously have a great affection for the genre of the hard-living, hard-drinking gumshoe who has to use all his guile and intellect to defeat the enemy. This shows in the look, feel and sound of this game, and the attention to detail is up there with the best slots games around.

The symbols in this game are represented by Dr Wuten, Jack Hammer, Hammer’s wife, a car, a phone, henchmen of Dr Wuten, an empty violin case with the outline of a Tommy gun and Dr Wuten’s airship. The scatter symbol in this game is represented by the bomb icon and landing these will activate the free spins bonus feature.

When it comes to extra bonus games, the Sticky Win bonus game is probably the best and works by sticking all winning symbols to the reels each time you land a winning combo. The rest of the reels are then re-spun and keep on re-spinning until there are no more winning combinations.

NetEnt’s game designers have certainly put a lot of thought, time and effort into this game, and the result is a game that looks fantastic, plays smoothly and offers some sizeable winnings, especially during the free spins round. The sticky wins feature is also a nice addition and can really make a difference to the amount of money you win on a spin. The game has been optimised for play across all devices including smartphone and tablet as well as home PC and laptop.