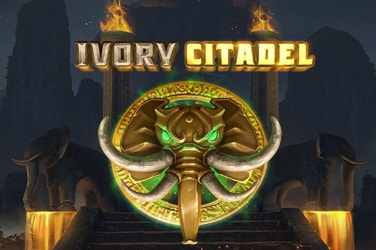 Ivory Citadel is a historical fantasy slot by Just For The Win, a developer launched in 2016 who has released a few popular titles including Spectre Estate and Deco Diamonds.

It’s a fun slot with a few nice features under its belt, and from the moment players open the reels, the slot looks and sounds high quality.

Ivory Citadel feels like a big name title. The slot’s graphics are beautiful 3D renderings of animal faces carved into great stone slab reels, and behind the slot, players can see rocky walls of the Ivory Citadel. Even the slot’s soundtrack feels epic: it’s a tune that wouldn’t feel out of place in Game of Thrones.

The return to player of Ivory Citadel is 96.03%, pretty much dead on average. This means that if you play Ivory Citadel and spend around $100 on spinning the reels, you’ll make, on average, $96.03 back in winnings. It’s a pretty straightforward figure and most players will be happy with this RTP. It’s also a medium variance slot which works well for players looking for an accessible slot with good balance in terms of win frequency and size.

Ivory Citadel is a great looking slot with a Free Spins round that truly makes the most of mystery symbols. The mystery symbols are really the star of the show here, being the key to unlocking some of the slot’s biggest wins and tying both the Free Spins round and the regular gameplay together. If you’re into fantasy slots with an epic feel and you’re looking for something new, it might be worth giving Ivory Citadel a spin.