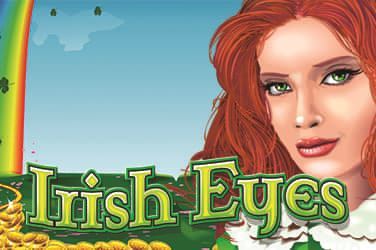 Irish slots are becoming increasingly popular, and any new additions are competing amongst an insanely crowded market.

With an RTP of just over 95%, it’s fairly standard for a slot of this type. So how does Nextgen Gaming’s Irish Eyes live up? Let’s find out…

If you enjoy a classic Irish cliché, Irish Eyes will not disappoint. This game is accompanied by recognisable Irish music and traditional background, set with a blue sky, four-leaf clovers, and the end of a rainbow. The imagery is fairly simple and cartoon-like, which is effective due to its contrast with the standard white reels. There are 5 reels with 25 paylines, and enough features to be enjoyed.

Symbols range from a leprechaun pipe, a gold ring, and a large green hat, all very theme-appropriate. Players are hoping to see the gold ring, being the highest paying symbol and offering a payout of 1,500 coins for 5 symbols on the reels. There are also the more traditional 9, 10, J, Q, K, Ace symbols.

Like every classic Nextgen game, Irish Eyes includes a Free Spins feature, which is initiated by a striking red-haired woman. If you’re lucky enough to see more than three of her symbols on the reels, you’ll be awarded 12 free spins. Unlike some slots, we’re sad to say there’s no chance of any multipliers in Irish Eyes. On the bright side, the Free Spins feature can be retriggered if you manage to land more of the red-haired lady’s symbols. As expected, the rewards will increase the more times you land the symbol, with bets being increased by up to 5,000 coins if you manage to land all 5 reels.

It wouldn’t be an Irish-themed slot if we didn’t see a leprechaun, but in this game, he isn’t just an addition to the aesthetics. He’s not even acting as a wild symbol – he’s the key to the Pick Me Bonus feature that is won when the leprechaun lands on the first and fifth reel.

The feature works by transferring the player to a screen with many different Irish objects complete with various coin amounts. You can also win more picks if you trigger the Pick Me Bonus during a Free Spins round.

If you’re feeling like the luck of the Irish is on your side, why not try the Gamble feature? Simply click the button at the bottom of the reels for the chance to double or quadruple any recent winnings. You’ll be led to a game of guess the card, where the right colour will double your stake, and the correct suit will quadruple.

While we enjoy these features, we must admit that we were hoping for more. The Free Spins can lead to a big increase in coins, but the stakes aren’t too high in general, and Irish Eyes could have done with a couple of exciting bonuses to compete with the many others in the market.

If you’re a sucker for an Irish theme, we’re sure that Irish Eyes won’t disappoint. It hits the nail on the head with the visuals and theme-related symbols, but it doesn’t quite deliver when it comes to the bonuses. Regardless, we’re sure it’s worth a spin or two! Head to CasinoNZ.