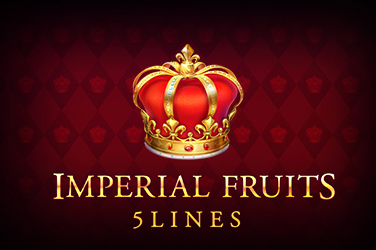 With the fruit machine being an old tradition for many, developers Playson have been on a mission to bring them into the 21st century. They recently released Imperial Fruits 5 Lines which is a slot game that is much fancier than its predecessors and can be found on online gambling sites, such as CasinoNZ!

Imperial Fruits 5 Lines is a slot machine that seems to go out of its way to pile on the luxury, with sumptuous scarlet wallpaper embossed with imperial crowns. The symbols in this slot game look like something painted by a Dutch master, all light reflections, and drips of water just like an oil-painted still life. Most of the symbols are ones you’ll recognize from fruit machines in days gone past including grapes, cherries, and plums. Imperial crowns and different coloured stars make up the highest value symbol in this game with sound effects that give it character as well!

The Imperial Fruits 5 Line series brings just five pay lines to the table but packs a top prize of 400x the stake. In addition to this impressive jackpot, it also has an RTP up at 96.71% which is well above average for fruit machines and provides players with quite a bit of bang for their buck! Return to player, or RTP as it’s abbreviated, is one of the most important things players look for when looking for a slot to play.

A high RTP rate is attractive and will bring in more players, as they want to know how much of their money on average, they can expect to return over long-term play. It’s nice to see Imperial Fruits 5 Lines offering one of the higher returns to player percentages you’re likely to find, firmly putting this slot up there with some of the best available at the moment.

The slot game Imperial Fruits 5 Lines is a classic type of game, but with few special features. The only bonuses are the two types of bonus symbols: the imperial crown and star scatter. These can give you free spins or multipliers to your winnings.

The crown and star symbols are the only two that can substitute for other icons to generate more combinations. They also have three forms: silver, gold or diamond- which offer different potential payouts in total wins (though they will not always be available). Regardless of what it lands on, a scatters symbol does not need to land on consecutive reels to produce winnings.

Enter the world of Imperial Fruits 5 Lines, a slot game with familiar mechanics and inviting bonuses. The visuals are updated for today’s gamers, while still maintaining that classic feel! If you’re looking for a no-nonsense classic slot game, you’ve found it. You must give this slot a try. Why not give this outstanding slot a try right here at CasinoNZ?