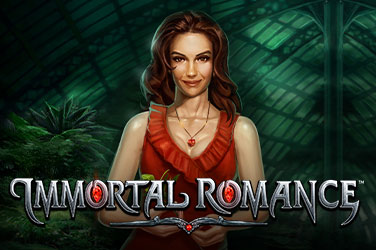 Immortal Romance is probably one of the most influential pokies of the past decade. It’s actually getting on a bit now, having been released in 2011, but at the time it was the absolute cutting edge of slot technology and even now holds up well against even the latest releases! So is this vampire about to rise again, or does it belong back in its coffin? Let’s take a look in our Immortal Romance slot game review.

It’s the storyline and the commitment to the atmosphere that makes Immortal Romance a hit. Featuring two male vampires and their female human love interests, the design is appropriately gothic with brooding characters, shadows, creepy statues and shafts of sunlight falling into dusty tombs everywhere you look. The low value symbols are gothic renderings of the standard 9 – A symbols, while the high value symbols are the four characters and images of creepy castles and strange manuscripts, but the real triumph is the animation. The game is peppered with little cutscenes depicting events in the story that happen as you play, including a particularly memorable one of a scientist grafting vampire blood into a plant, that go nicely with the creepy gothic music and sound effects.

There’s plenty going on in the Immortal Romance slot game, and while it looks fairly traditional to start with, the bonus games up the ante quite a bit. It has five reels and three rows, with 243 ways to win mechanic and a maximum bet of £/$/€60 per spin. The payouts are pretty generous despite the fact there’s so many ways to win, and you could be looking at values of up to 1500x your stake for five of the game logo wild cards or 500x for Sarah, the woman in the red dress. Nothing can top the scatter though, which pays a whopping 6000x your stake for five! This all results in a really high RTP of 96.86%, music to the ears of any pokie fan!

The first, most famous, and highly appealing feature in Immortal Romance is Wild Desire, triggered totally randomly, which will turn up to five of the reels totally wild in one spin. This happens gradually, building up the suspense as you wait to see how many wild reels you’ll get, but can result in a jackpot of an amazing 12,000x your stake, which is an incredible win for anyone.

The second bonus is also a lot of fun, and is activated by landing at least three scatters. You don’t need more than three, but landing four or five significantly increases the cash prize, so why not? At this point you’ll choose which character you want to play with and you’ll get the set of spins and bonuses they carry: 10 spins with a 5x multiplier, 15 spins with random multipliers of up to 6x, 20 spins with a temporary cascading reels mechanic in play, or 25 free spins with randomly transforming symbols.

It’s easy to see why Immortal Romance is so popular, thanks to the combination of amazing visuals and dedicated storytelling that push this theme above and beyond the competition. It’s all super cheesy but also super fun, and who can complain about the potentially vast wins in store for you in the spooky crypt?