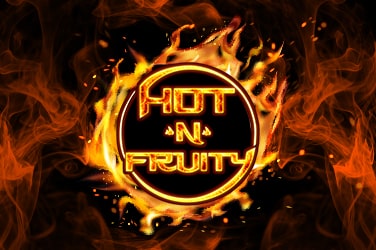 The traditional fruit machine is getting a modern makeover in this next slot from Tom Horn Gaming. Combining the best of both worlds, Hot N’ Fruity has all your favourite fruity symbols and classic features but with an updated twist for today’s players. With fiery prizes on offer we are turning up the heat to find out if it offers equally hot rewards!

If you’re looking for a slot game with all of the traditional fruit machine symbols, look no further than Hot N’ Fruity. Not only do this slot’s five reels feature watermelons, grapes, lemons, and cherries but also bells and lucky sevens! What makes it even more interesting is that flames are licking up against those reels while background music helps to set the mood.

The fruit looks spectacular and has some amazing 3D graphics that make the game look very clean and crisp. As symbols grow and jump when included in combos, different modes on the slot are activated by flaming sheets of fire across screen.

The Hot N’ Fruity slots may just seem like a traditional fruit machine with an updated twist; there is more than meets the eye to this modern slot!

Players are faced with 20 paylines and up to £/€/$100 per spin of the reels. The top prize is 200x your bet, but there are various bonuses that can help you win even more! The return to player rate of 96% is very solid and can give good value for money to players on this game as it is above the industry average RTP.

Players will find some great bonus features in this game, starting with the two wilds – green re-spin wild and the golden wild. The green wild is used on the middle three reels and can re-spin them for up to 3 rotations which can lead to extra combinations being made and players being rewarded handsomely. While the golden wild starts as any symbol but transforms into another for each spin that follows so make sure your winning combos are well-thought out!

The game of Hot’n’Fruity can get really hot! If you have enough luck and skill as to trigger an explosion from your winnings then watch out because that could lead to even more cascading wins. And if you’re lucky enough for every symbol on all three reels in slot one explodes before those symbols are replaced by new ones when they appear at random? Well, there is no telling how high up this will take your potential earnings which as bets can be has high as £/€/$100 and the max win per spin is 1000x what was bet originally – meaning that the jackpot is a whopping £/€/$100,000.

Hot N’ Fruity is an exciting new slot game which will have you thinking its a retro arcade! But don’t let the old-school graphics fool you. This modern creation has all of your favourite features: random wilds, re-spins and that big top prize to tempt even the most sceptical gamer for just one spin!