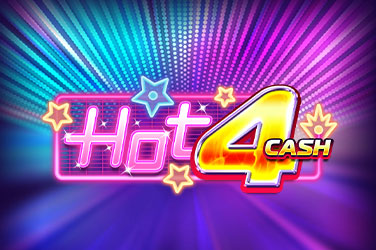 Hot 4 Cash is a slot game with its roots firmly in the good old days of fruit machines and one armed bandits, but with a dash of modern colour and cool design thrown in for good measure, a style we’ve come to expect from developers NoLimit City. So the neon colours and bright lights are impressive, but we think you’ll also like the bonuses and extra game modes that can turn a good session into an amazing one! But will you be hot for cash, or will you get your fingers burned? Let’s take a look in our Hot 4 Cash slot game review.

Hot 4 Cash doesn’t serve up an especially complicated theme, but we really love the combination of neon colours and strobing lights that make you feel like you’re playing a game show rather than a pokie. The background is a starburst of throbbing lights, and combined with the bouncy music and cool animated effects it’s easy to get caught up in the moment when you’re playing. The symbols are fairly typical of the slot market, including gems, fruits and lucky 7s of various colours, but they’re all rendered in shiny 3D graphics that look great without having to resort to gimmicks. It’s easy to learn: The cherries pay low, the gems pay high, the sevens pay highest. Simple!

The first thing to mention in this game is the funny looking layout, which is sort of diamond shaped with five reels and three rows, but with only two rows at each end and three in the middle. Despite the look it still plays as you’d expect, with 10 pay lines to play on and a limit of £/€/$100 to bet per spin. The red seven is the highest paying symbol in the main game, coughing up 150x your stake for five in a row, and while that’s not a massive pay out you can expect more from this game in the bonuses. The RTP works out just above average at 96.05%, so there’s plenty to play for!

The Hot 4 Cash slot game has a novel way of activating its bonuses, instead of using scatters or wilds there are ‘hot zones’ in two of the reels, and if you can fill these zones with the same symbol then you’ll play a bonus game determined by the type of symbol you landed. Just land four of the same symbol and you’ll get seven free spins with the triggering symbol and all normal wilds acting as sticky wilds for some great wins. Land cherries, sevens or gems in the hot zones and the central reels will be taken up by one colossal symbol that can generate monster wins, while landing symbols that are the same colour in the hot zones activates a wheel of fortune with a 1000x top prize. It’s a lot of fun trying to activate the different bonuses, and you never know what’s coming next!

Hot 4 Cash manages to squeeze a lot of excitement and suspense out of what should be a pretty simple pokie, so we’re in awe of NoLimit City’s achievement here. The main prizes aren’t huge, but thanks to the excellent bonus rounds there’s always another big win just around the corner!