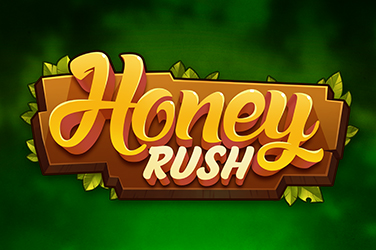 Honey Rush is a different slot game from Play’n GO. If you’re sick of slot games all looking the same, then Honey Rush is definitely one to try; it features a unique hexagonal grid designed to be reminiscent of honeycomb, and players take on the role of bees working away to produce honey in the hive.

It’s a fantastic looking game at first glance, and it’s packed with interesting mechanics and features to ensure the gameplay lives up to expectations. If you’re a fan of cluster slots or you’re keen to try something new, it’s well worth giving Honey Rush a go.

If you’ve never played a cluster slot before, Honey Rush can be a lot to get your head around at first. It’s played on a 4-5-6-7-6-5-4 reel formation grid, with each tile in the shape of a hexagon. Cluster slots mean that, instead of traditional pay lines, players form winning combinations of symbols in clusters around the grid. The game’s lower value symbols include flowers, while the higher paying symbols are coins and diamonds; the highest paying symbol on the grid is the diamond, which gives you 200x your stake for a cluster of 35 or more. The game gets really interesting when its special features come to the fore.

The game features the cascading symbols feature seen in other Play’n GO grid slots in which tiles that are a part of a winning cluster disappear and are replaced with new ones, opening up the chance of a second win on the same spin. The game also features a Rush Meter, which charges slowly as players amass wins, climbing through levels one to four. The first three levels, when activated, create a minimum cluster of 7 symbols on the grid and add a sticky wild as well. The final level can create a cluster covering the whole grid. The charge meter provides great incentive to keep playing, and the bonuses it provides are where most of Honey Rush’s wins come from.

Like many modern Play’n GO slots, Honey Rush works well on mobile. It’s an intricate game so can benefit from displays with good resolutions, but there’s nothing stopping you from playing this game on any iOS or Android device including both tablets and smartphones – the graphics will look great on either.

Honey Rush offers a return to player of 96.5%, which means that for every $100 spent on the game, players can expect to win about $96.5 back. It’s not a bad rate by any means, and only the most serious of players can hope to scout around for higher RTP rates. It is a very high variance game so players will need to put some time into Honey Rush to ensure they maximise their chances of winning back their stakes.

Honey Rush is a very interesting slot game which showcases the best of Play’n GO: beautiful graphics, innovative mechanics, and a unique theme. This game is definitely worth your time, particularly if you’re a fan of cluster or grid slots.