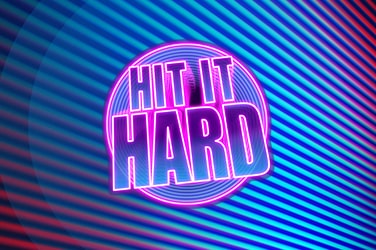 Hit It Hard is a slot from ELK Studios, a game provider based in Sweden and first launched in 2012. The slot was released in 2020 and is clearly themed around classic slot machines. The reels are set inside a slot machine, with neon lights illuminating the reels from the sides.

Symbols on the reels are classic fruit slot symbols such as lucky 7s, watermelons and cherries, but this retro slot packs a contemporary punch in terms of the features on offer.

Hit It Hard is a payline slot with five paylines in play, like many classic slots. Total bet per spin can range from 20p to $100 per spin, and symbols include 7s, bars, and fruit symbols. Players win for landing three of a kind across a payline. Triple red 7s payout the highest values in the game, paying out 50x the bet for three on a payline. Triple blue 7s and triple green 7s pay out 25x and 10x the bet respectively. Fruit symbols are the slot’s lowest value symbols, paying between 1.5x for three watermelons and 0.5x the bet for three cherries.

Where to start? There are so many features packed into Hit It Hard it’s difficult to know where to begin. Hit it Hard may be styled around classic slot machines, but the similarities stop there. Reel three is packed with multiplier Wild symbols which will even stick around for a re-spin if no wins land the first time around. The slot’s main feature is the Roll the Dice bonus game, which triggers when a dice symbol lands on the middle position of the third reel. The Roll the Dice bonus game is packed with mini-features including pachinko mini-games, stacked Wilds, and Wild spins. It’s a lot of fun and worth playing to trigger this feature.

Hit It Hard offers a return to player of 96.3%, which is a little above average compared to other online slots. This figure means that for every $100 players spend on the reels, they can expect to win back around $96.30. It’s a decent RTP and one that shouldn’t put players off. The slot’s variance rate is medium to high, which means wins don’t roll in very frequently, but when they do they can be on the bigger side. The slot’s Roll the Dice bonus game is where many of the biggest wins are in Hit It Hard.

Slots which combine retro slot machine style and base gameplay with contemporary features and bonuses can be hard to come by, and Hit It Hard fills this niche well. It’s not a slot for players who like the modern style of slots with more paylines, reels, and ways to win, but for players drawn to the classic aesthetic but bored of base games, Hit It Hard should be a good compromise.

ELK Studios have created something unique in this slot, and players should at least have a spin before deciding it’s not for them.