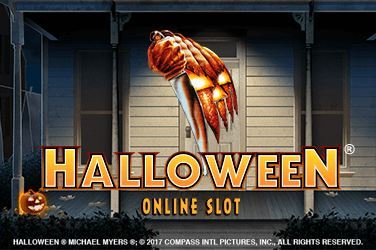 The 40-year-old horror classic Halloween is back with a slot version for those who crave the thrill of playing and winning. The films cult following are likely to keep watching and playing after all this time.

Will relentless serial killer Michael Myers be able to win you money as well as scare your socks off? Find out with this Microgaming slot.

You’ll find with most movie inspired slot games it helps if you have seen the movie before playing in order to enjoy and understand the game to its full potential. With this you can pick up the general idea without having seen the film. The background of the reels is a derelict, old house, perhaps this is a reference from the original film, and this is not the only one you’ll find in this slot.

The symbols of the film are beautifully crafted in this set. The knives, gun and cell phone, or Annie’s knitting needle which Michael is stabbed with later all make appearances. Not to mention characters like Laurie, Loomis and Lynda from the movie.

From the graphics to photos from the film, there are many ways for a newcomer or returning viewer of The Halloween franchise to get invest in this narrative. The game also includes brilliant cinematics and animations including a knife to slash the winning symbols right off the screen. The sound effects include that haunting film soundtrack everyone has heard at some point, also sound and animations when wins are triggered help to keep the game moving.

Halloween has up to 50 paylines across 5 reels giving the player a good chance to get wins, however the highest valued symbol of Laurie only pays 10x the stake for 5. That could possibly explain the high RTP (Return to player) of 96.01% that shows how often winners can expect to receive a win or that the wins will increase in bonus games.

Another interesting feature included by Halloween is that of the wandering reels format, when this occurs a frame will pass over the reels expanding 3 of the reels to 4 rows randomly increasing the potential winnings. On top of this feature all character symbols in the frame are turned to expanding wilds that take over other reels.

This slot incorporates a Jack O’ Lantern wild which acts in the same way as normal wilds by substituting for other symbols, as well as this the game includes a scatter that is need to activate an exciting mini-game. By landing 3 scatters the Trick or Treat wheel is activated, this will spin continuously landing prizes like instant cash. That is until one of the 2 mini games are landed on:

Whilst only fans of these cult horrors can appreciate the scary side of the game it is brilliant either way, the 50 paylines is quite impressive and the effort went into each symbol is admirable. If you liked this slot, why not check out the rest at our slot game page including games from the same producers as Halloween. Triple Edge Studios, the people behind such classics as Book of Oz.