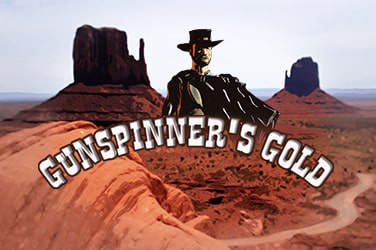 Gunspinner’s Gold is a Western themed slot game that features some big prizes and flashy graphics.

The legend of the Old West has captured our attention for centuries, primarily because their risk-taking philosophy mirrors ours as slot players: Whether it was searching for gold or robbing banks to get rich quick, life on the frontier always seemed like an adventure and so does this slot game! With Gunspinner’s Gold Slot, you can experience all the fun and excitement of being in “the Wild West” with some great gameplay mechanics.

Gunspinner’s Gold has a classic scene of the southwestern American desert as its background. The reels themselves have 9 – A that is disguised to represent low-value symbols, while the higher value icons are represented by various icons including cowboy life: cacti, six shooters and slugs of whisky. Some fun animations accompany bigger wins with the western soundtrack playing in the background which gives the game a great atmosphere. Compared to today’s most modern games this one may seem outdated, but the ambience of terror and suspense make up for any drawbacks. The gameplay is just as atmospheric on mobile devices too!

In a world where slots can seem like they’re all the same, Gunspinner’s Gold is an interesting option. With just five reels and three rows to play on, there might not be as much going on here than in other games – but that doesn’t mean it isn’t worth checking out! In addition to 30 pay lines of high-paying game features (the showgirl symbol offers 6000x for its top payout!), this slot has some tasty bonus rounds with great rewards too: bag ‘o nuggets at 3000x; sheriff badge at 1000x can be very rewarding. The game’s RTP sits at a very solid 96.25% which can give players good value for money.

The anticipation of free spins is one of the best parts about any video slot machine. With this game, you can experience it in two ways because there are multiple symbols that trigger these events to occur on different levels. First and foremost, if you land three bonus symbols during a spin then twenty rounds will be awarded with 4x multipliers applied to your winnings for every round!

One of the best parts about this game is that there are two ways to activate free spins. The first way, which grants you 20 free rounds when landed three times on one spin, stacks with a 4x multiplier and stacked wilds for an even more exciting round!

The gold mine is open, and Gunspinner’s Gold has everything you need to go digging! Get the best odds in this game with a top class payout that includes two excellent bonuses: one for each kind of win. There are also multiple free spins available at 4x multiplier which can really get your fortune going strong!