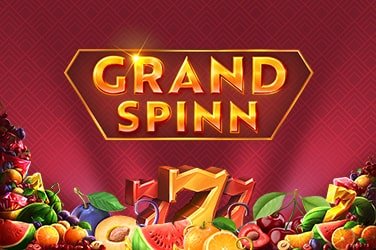 Want a simple gameplay experience that can provide you with the possibility of winning some lucrative rewards?! Then NetEnt’s Grand Spinn title is the game for you!

Grand Spinn is an exceptional title from NetEnt that combines classy with an element of simplicity with everything it does for CasinoNZ players who enjoy this game.

The game features a basic gold and red background that oozes class whilst keeping things as simple and attractive as possible. There is not much else to it, but it is very effective!

NetEnt has kept simplicity as the key for this Grand Spinn slot game, providing players with a basic 3-reel, 3-row game formation that features just one payline – the middle row!

Several exceptionally designed icons are on the grid, each providing gamers with the opportunity to trigger wins. These icons consist of the classic fruit machine icons, with bars, cherries, plums, oranges, watermelons and the three lucky sevens all available to land. It should be noted that there is a blank symbol in this game – the logo – and landing this will not provide a reward!

Although the game has been made to appear basic and simple on the surface, that is far from the case, as NetEnt has provided CasinoNZ players with the opportunity to enjoy a range of Grand Spinn bonus features!

Perhaps the biggest feature is the ‘Nudge’ mechanic that has been included, which will move icons down one position. This will only happen if the winning symbols match those above it in the reel. If this is the case, it will move down and provide additional wins until no other combination can be formed.

This feature will continue to work through the reels, starting from the left, before going to the middle reel before hitting the final reel on the right. Once the feature ends, an arrow may appear above one of the reels, allowing the symbol stack to be reset to the first position, thus re-triggering the feature once again!

However, this is not the only Grand Spinn bonus feature available, as numerous Multiplier Wilds are also possible to land and trigger!

These will enhance the wins provided as they will help to substitute all regular icons and provide a payout multiplied by 2x. Those that land 2 or 3 of these will receive 4x or 8x the payout!

Lastly, NetEnt has provided a jackpot game as the final Grand Spinn bonus feature, with players able to find three different jackpot symbols that can trigger the huge prizes on offer. These icons – which are red diamonds – come with one of three words: ‘Mini’, ‘Midi’ and ‘Mega’, which each relate to the jackpot size.

If they appear on the first or the second positions available on the reels, a prize can be triggered, but the lowest one will be awarded.

The return to player (RTP) rate for this Grand Spinn slot game stands at 96.19%, which is around the industry average. NetEnt has also provided a high volatility level with this title.

Grand Spinn is an incredibly simple game to play and enjoy, and one CasinoNZ players should be looking to try if they have not already! The game can allow everyone to win big prizes, especially with the awesome jackpots available!

If you like the Grand Spinn slot game, why not try Diamond Empire or Starburst?!