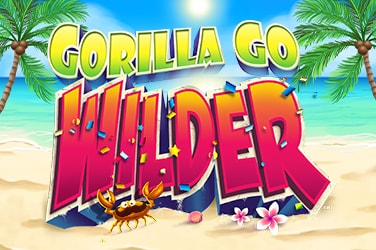 Gorilla Go Wilder is the sequel to Gorilla Go Wild, so as you might expect there have been a few upgrades since its predecessor. Charting Gary’s adventures in his tropical world, this new game features a fun levelling up system that can dramatically improve your chances of winning. On top of all this are some exciting bonuses for players seeking them out–but with such an interesting and interactive title like Gorilla Go Wilder it’s hard not to love!

Similar to the first game in this series, Gorilla Go Wilder is a bright game which is full of different colours and vibrant Caribbean music. With well-made 3D backgrounds, fun animated symbols and Gary himself running across the reels, the scene is well and truly set. Players can appreciate the effort that has been put into the game. The standard playing cards make up the low-value symbols (9 – Ace), but the higher value symbols are made up of a range of different animals such as lemurs, toucans, chimps, and Gary himself.

The 25 pay lines and the three rows give you a lot of opportunities to win on this new game! And, if that’s not enough for you, there is also an island full of bonuses waiting at your fingertips. With five reels in play as well as some interesting mechanics found within the main part of the game such as rolling dice or turning cards over from hidden stacks with different values assigned to each one depending on which side they are facing up when revealed; I think it will be hard not to find something fun here.

Gary the Gorilla is your wild, most valuable symbol at 50x your stake. At random intervals during gameplay, shells will land on the reels and stick there for as long as new shells come in or all of them are stuck to a reel! You’re going to need it too because this game’s return-to-player (RTP) rate is down to 92% in the base game play, but it does increase in bonus rounds. The maximum stake that can be bet per spin is $/€/£75.

The bonus rounds in the Gorilla Go Wilder slot game can provide players with a lot of fun , and at first, you’re offered just two of seven beautiful island locations. Land four bonus rounds and unlock access to all but one of them. There’s something for everyone with crystal caves that offer wilds on every reel; light jungles with extra paylines; waterfalls which give players free spins when they land scatters anywhere on screen–and much more! These are only some examples from this innovative release so don’t wait another minute before playing it today.

Gorilla Go Wilder has a perfect balance of good looks and great mechanics. The game brings to the table fun levelling mechanic, while also remembering payouts well and including bonuses in every feature possible.