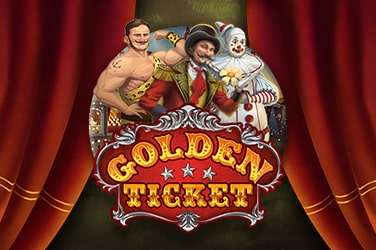 Welcome to Golden Ticket, the slot that takes you to the circus. The ringleader welcomes you to the side of the reels while you spin strongmen, clowns, and juggling pins with the hopes of winning prizes. The slot is set against a busy circus backdrop, with tents and wagons from a 19th-century fairground seen beyond the reels.

It’s a wonderfully unique slot design, so let’s see if the gameplay is just as interesting.

Golden Ticket is a pretty simple slot at heart; players win by lining up matching symbols in groups of three or more in horizontal or vertical lines across the grid. The highest paying symbol in the base game is the ringleader, who pays between 0.5x and 25x the bet for between three and five adjacent symbols. Next up is the strongman, who pays between 0.35x the bet and 15x the bet for three to five symbols in a line. Lower value symbols include weights and juggling pins, which payout between 2.5x and 5x the bet for five symbols next to each other on the reels.

There are a few special features to enjoy in Golden Ticket. There’s a bonus prize of 1000x the total bet available for clearing the whole grid and a Bonus game which is unlocked when players reveal BONUS on the reels. When the bonus is first unlocked, players will play a fun mini-game involving a shooting range then shoot down 5 matching star symbols from the range to win up to 20 free spins. Players can also enjoy cascading symbols in Golden Ticket, which means that when players land a win on the reels, those symbols disappear from the grid and new ones fall into place. This means that multiple wins can occur after a single spin; it’s a popular feature and one that we’re very glad to see Play’n GO including in this slot.

Golden Ticket offers an average return to player of 94.74%, which is a little on the low side compared to most modern slots. This means that for every $100 players spend on the reels, they can expect to win back around $94.74, although of course, most players hope to get lucky and win back more than this. There are many slots with higher returns than this, so players should perhaps only play Golden Ticket if they’re willing to take this hit. It’s also a medium variance slot, which means wins are fairly balanced for many playstyles.

Golden Ticket is an interesting slot; the grid gameplay is fun, and because of the inclusion of cascading reels players will find that any single spin can result in some big wins. The bonus feature is well thought through and the inclusion of the shooting range mini-game really helps to recreate the fun of the fair. If Golden Ticket looks like it might be for you, give it a shot; just bear in mind the lower than average RTP.