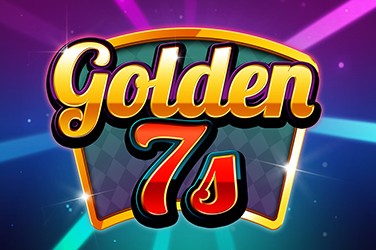 For many, the number 7 is an unforgettable icon of gambling. Whether it’s on its own or in a cluster at least three-deep, players know they’re set up for some big bucks when that famous digit flashes across their screen.

The Golden 7s slot game is a classic fruit machine slot game, but it’s not one of those poorly developed aging games. As we found out in our review of this slot game, you can have tons of fun while playing for real money! You can also play for free right here at CasinoNZ.

The Golden 7s slot game has a clean and modern design that is reminiscent of old-school slots. The background consists of starburst effects, while the icons are fruity in appearance with fresh designs. All this comes together to create an enjoyable experience for players who want something simple but still visually appealing without having too many distracting animations or graphics on screen at once.

As you might expect for this type of game, the design and mechanics are as simple as they come. With 40 pay lines to play on, there’s always a chance that your next spin could be the one! But don’t worry about spending too much if it’s not in the cards because with only £/€/$100 max bet per round, high rollers can have fun without breaking their bank accounts.

The Golden 7s slot game is a medium to high variance. This could be because of the limited winning symbols, such as the gold star scatter and golden 7 that pay 2500x your stake, respectively. You will need five other fruits before you are looking at any whole number prizes; so, it’s best just go for those big-time rewards.

Return to player percentages are one of the biggest factors in a player deciding to play your slot. It gives the player an idea of how much of their stakes they can expect to return over long-term play. Golden 7’s has an RTP percentage of 94%, which is below the current industry standard. We’d have liked to have seen a little more from the developers with this slot, but what the game lacks in return to player rate, it makes up for with its classic feel and solid gameplay.

Golden 7s has just what you are looking for! It does not have any conventional bonuses, but it offers an interesting gamble system. Every time there is a win, players can take their chance at doubling or even quadrupling the amount of money they won in this game.

Golden 7s is the perfect slot machine for when you want to take a break from all of that flashy nonsense. The best part about this casino game? It’ll never let you down in terms of classic entertainment. You should give it a try, so why not give this great slot a try for free right here at CasinoNZ?