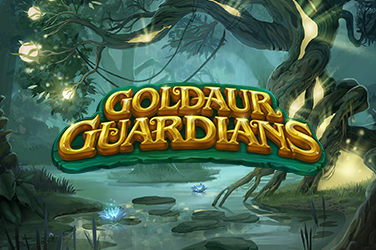 We love a good fantasy theme when it comes to slot games and Goldaur Guardians is everything any Dungeons and Dragons player could hope for: fantastical creatures, a deep well of lore to explore. It’s the perfect game if you want something that mixes your love of dragons with a slot machine!

Many treasure-loving adventurers have travelled to the enchanted forest in search of a massive hoard. Elf warriors, scarlet witches, beast folk and magic trees are all on guard duty protecting this bounty from intruders like you! Can you sneak past these formidable foes or will your adventure be cut short? Let’s take an up close look at our Goldaur Guardians slot game review.

The Golaur Guardians slot game will take you through a spooky forest that includes stagnant pools and gnarled old trees. If this isn’t enough to entice you, the reels themselves are considerably brighter with tiny faeries in red and blue making up its low-value symbols. The high-value characters include wood elves, high elves, dark elfs as well as a sorceress who is dressed in scarlet clothing while wielding an ornate staff topped by three large crystals dangling from chains of gold wire above her head.

The art is fantastic, every detail intricately crafted and full of life. Excellent animations make the experience even more fun with an otherworldly soundtrack that transports you away from your daily routine to a fantasy world unlike any seen before on Earth

The game comes from developer Microgaming who also develop massive hits such as Book of Oz and Fruit Blast.

Faeries have a reputation for being tricky and quick to change, but they’re nothing compared to the slot machine! In this game you’ll find five reels with three rows of playing space. This setup is simple enough – there are 20 pay lines that can help generate big wins when symbols line up in a variety of sizes ranging from 1×1 all the way up 3×3. The most valuable symbols will sometimes take over your screen spanning out bigger than ever before.

Wilds are an important aspect of the slot game because they offer players a chance at triggering bonus rounds. The wild symbols also add excitement to the gameplay by boosting payouts and multiplying winnings up to 50x your stake!

Don’t expect regular wins with this volatile slot game but with unpredictable lucrative rewards and a massive jackpot of £/€/$2 million it’s worth giving it a go, an RTP of 96.34% is also encouraging to those players who are a bit more risk averse.

The free spins in this round are activated by landing three scatters. If you’re lucky the Hero Spins feature will be activated, granting you a random hero stacked on your first two reels while a huge symbol takes up the last three reels! Get a scatter on this feature and you’ll begin the Hero Trail, upgrading your hero to the next level! Reach it’s summit and you will be able to take 1000x your stake with every spin.

Goldaur Guardians is as beautiful and changeable as any elven maiden, with the downside of a volatile exchange rate. However, if you do some research beforehand or rely on the bonus rounds there’s always a chance to rake in huge amounts! You just need to be brave enough first – will you dare?