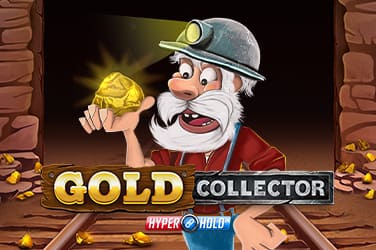 The popular Hyperhold feature has been added to this gold rush slot by All41 Studios, although the visuals may be simple there is still lots to talk about here. Powered by Microgaming this 50 payline grid consisting of 4-rows and 5-reels has some exciting bonus features including fixed jackpots on each reel.

Around the reels stands the inside of an olden-days mineshaft with wooden beams reinforcing the stone craved walls and ceiling. To the right, a wood-fuelled fire casts a warm, orange glow across the background lighting up chunks of gold ore that litter the bottom of the screen. To the left of the grid hanging, wooden signs display the Hyperhold Mini, Minor, Maxi, Major and Grand jackpots that are also displayed across a wooden beam across the top of the grid. The grid itself is divided by hanging rope that along with a Western backing audio completes the gold mine set.

The symbols you can play with here consist of the standard low-value 10 – A of card suits that are designed to look carved out of rock from the mine itself. Players hoping for a more lucrative return can hope to land the gas lantern, pickaxe, spade, gold cart or old prospector across a payline. There is also a Gold Collector Wild, dynamite Scatter and mountain engraved golden coins that will initiate the Hyperhold feature.

The golden Hyperhold coins all come with a value imprinted on them, at the end of the feature this value is paid out so there is potential for a satisfying return here. To access this feature players can hope to land 3 or more of these symbols in succession anywhere across the grid, during the round only the reels that include a triggering symbol is in play. The symbols receive a spin meter here with 3 spins unlocked, if another Hyperhold symbol lands then the spins are reset with the round ending if all spins are used or every position is filled with golden coins.

As mentioned, each reel comes with a fixed jackpot for players to unlock, these are activated by filling the reel with a symbol. From left to right the returns are 10x, 20x, 50x, 100x and 1,000x the bet placed so players better hope they are betting big when this feature is received.

What’s more Gold Collector includes a free spin feature, this is activated by landing 3 of the dynamite Scatter symbols on the middle 3 reels. This will reward players 8 free spins through which it is possible to trigger the other bonus features, these spins can be retriggered by landing another 3 Scatter symbols during the feature. Unfortunately, there is nothing else added during this feature like a multiplier, but free spins are good enough for any player.

All41 Studios have provided us with enough opportunities of striking gold here and against this, the fairly basic visuals don’t matter. The bonus features add all the excitement needed here and can provide some great payouts as well. Gold Collector proves the popular gold mine is not outdated and when used correctly can create a fantastic game.

Check out our slots page for more great addition like Book of Oz or Centurion.