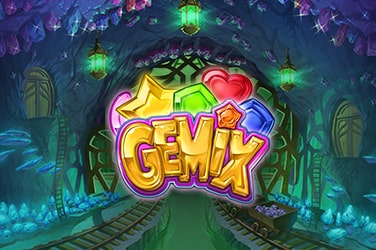 Gemix is a unique cluster pays slot which is more like three slots than one. This slot, by Play’n GO, one of the most respected and trusted developers in the business, brings players into a dark mystery wood, where magical characters will guide them as they spin gems on the grid.

Follow a dwarf, a princess, and a wizard as you adventure through the forest with free spins, warping symbols, and much more.

Gemix is a cluster pays slot, which means players win by gathering together clusters of identical symbols on the grid. Clusters of five or more symbols payout. The highest paying symbol in the game is the golden star, which pays between 3.5x and 1000x the bet for between five and 15 symbols on the reels. Clusters of 15 red hearts and purple crescents will pay out 500x and 200x the bet respectively, while lower-paying symbols such as the blue gem payout between 0.1x and 7.5x the bet for five to 15 symbols in a cluster.

There’s a lot going on in Gemix. To the right of the reels is a little display which shows positions on the grid. Land winning symbols in all designated positions on the grid to unlock the next world to play in; every world in the game has a different design, as well as new Wild features to play with. Advance to worlds to find spreading Wild symbols and sticky Wild symbols and switch between worlds at will once you’ve unlocked them. There’s also a Crystal Charge feature which steadily charges up as players land wins. Once 20 symbols have charged up, the Crystal Charge will release a random feature which includes warping, transforming, and destroying symbols on the reels. Win with 40 or more symbols to supercharge your next round and enjoy a 3x multiplier on your next win.

Gemix offers an average return to player of around 94.78%, which is on the low side. What this means is that for every $100 players spend on the reels, they can expect to win back an average of around $94.78, although of course, many players will win more or less than this. This is low compared to most slots, which average around 96%, so players should bear that in mind before spending lots of money on Gemix. It’s also a medium variance game, which means it’s well balanced for many different play styles.

Gemix is an interestingly unique slot that gives a sense of progression as you play your way through the game, unlocking new worlds and trying out new features. It feels like more than one single slot, yet on every spin, the promise of Crystal Charge features keeps the stakes high. The slot’s RTP could be higher, and unfortunately, this holds Gemix back a little, but players looking for a fun few spins should check this slot out.

Looking for some gems, you might want to check out Cash Pump, Ring of Odin and Agent Destiny.