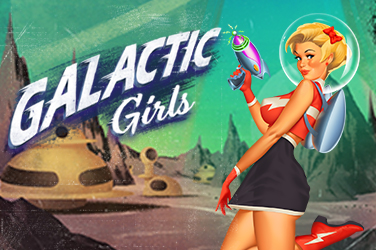 The Galactic Girls slot game is a rare treat that indulges you in the fantastical world of 1950s pulp science fiction. With galaxies full of strange new worlds to explore and friendly as well as not-so friendly aliens, mad scientists, sentient robots, bizarre plants etc., it’s an adventure for all those who love this type of entertainment!

This slot game is a thrilling space adventure for players who are looking to escape their everyday lives and explore the galaxy. Join intrepid ladies in inappropriately skimpy 1950s attire on this mission, spinning out stacks of cash along your journey!

This is one of many slot games developed by EYECON others include Enchanted Prince and White Wizard.

Science fiction lovers rejoice, as this game will take you back to a time when science was at it’s most imaginative and your only limit was your imagination. The graphics are captivating with their bright colors and quirky design that is sure to make any retro fan happy.

The game has five high value icons – each symbolized by one of four retro and wildly dressed women who represent the moon, Venus or Earth herself. The 9’s and A’s that fill out this slot machine do look like standard fare but have been given a cosmic twist for added appeal.

The backgrounds change depending on which stage of the game you’re in. From 1950s sci-fi, to nuclear fallout — it all depends on what kind of level your character is tackling at that moment.

The mechanics of this game are different from most, with six rows and five reels that make it taller than the average slot. It also relies heavily on features, because every symbol has a feature attached to it; so there’s always something special happening while you play! The low-value symbols play a much more prominent role in this game than usual, but it’s undeniable that they make the experience all the better. The RTP is nice and high at 96.62%, so there’s no harm done to your chances of winning!

What’s not to love about the bonus rounds? Each high value symbol girl has their own special ability you can activate after the free spins round. The scatter in this game is definitely Star Trek inspired, and collecting between three and five on the reels activates your 10 free spins. During these spins, there are chances that any of the girls will appear as stacked symbols! If you manage to hit one during those bonus rounds – they’ll give you an extra power-up for certain games where she’s involved.

With five stacks, you can get a chance to play up to twenty-five free spins where each girl has their own bonus game! You could be playing Substitute Bonus and Symbol Replacer Bonus or the Expanding Reel Bonus.

The Galactic Girls slot game is a breath of fresh air. With an interesting style and theme, this fun-filled casino game has mechanics that are easy to grasp after a few rounds in the world of space girls.

We have so many slots out of this world, such as Aladdin’s Legacy, Foxin’ Wins Football Fever, Top Strike Championship and Abracardabra.