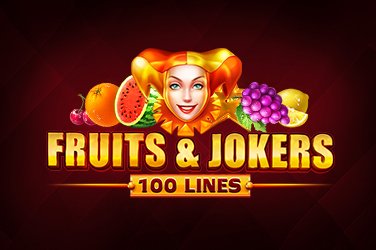 Despite the advances that we have seen in slot games over recent years there is still a place in our hearts for old school, retro slot games. These blasts from the past may not pack as many features or as many bells and whistles into their mechanics as modern slots do, but they make up for it with simple and engaging gameplay and great prizes, which is exactly what you can expect from Fruits & Jokers 100 Lines.

All the info you need about this game is there in the title, but is it any good? Let’s find out in our Fruits & Jokers 100 Lines slot game review.

Developers Playson have brought out a range of slots based on the standard fruit machine model called ‘Timeless Fruit Slots’, all of which focus on a different variant of the fruit machine theme and feature similar visuals and art styles. This version is called Fruits & Jokers 100 Lines, and as the name suggests it brings some special joker symbols to the table alongside the traditional fruit. That’s mostly what there is to see here, with all your favourites making an appearance against the deep red background, such as oranges, lemons, cherries, melons and the lucky 7. There is no soundtrack and only the barest animations, but the fruits themselves look very well rendered almost in the style of an oil painting.

There is actually an extra row to play with that you might not be used to in this slot, giving you four rows and five reels, but the Fruits & Jokers 100 Lines slot game isn’t exactly bursting with features on top of this. Whether that’s a good or a bad thing depends on your style of play, but for us this is a stripped back slot game experience that does away with all the complexity in favour of good old fashioned spinning and winning. The best paying normal symbol is the joker wild which always appears stacked, meaning it takes over whatever reel it lands on, helping you generate extra wins and paying 75x your stake for five. With maximum bets of £/€/$100 that means you’re looking at 7500 coins for a top win, which is nothing to sniff at, especially with an RTP of 96.46%!

While there are no specific free spin or pick and win bonus rounds available in this game, the highest paying symbol in the whole game is the star scatter which pays out at 400x your bet and carries with it a massive maximum payout of 40,000 coins. It’s a scatter, so it can land anywhere on the reels to pay out rather than just in a line, making it even easier to grab that maximum.

Fruits & Jokers 100 Lines is a very simple experience at heart, and while it certainly doesn’t compare to more modern slots in terms of features, you can’t deny that the core of an exciting and rewarding game is still there at the heart of it. If you hanker for the thrill of spinning and winning with nothing to get in your way, this slot is the place to do it.