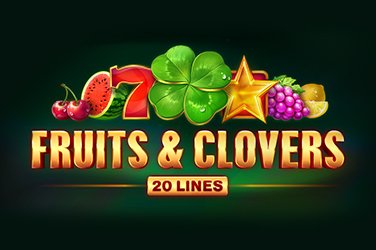 You may have noticed a trend towards upgraded versions of old slot games, retro fruit machines spiced up with new mechanics and bigger prizes for modern audiences. Fruits & Clovers: 20 Lines is not one of those slots. An unashamedly retro game, Fruits & Clovers: 20 Lines certainly brings upgraded graphics and extra lines to add to its improved prizes, but none of the whizzy new features you would expect from a modern game.

What that does mean is that there isn’t much to stand between you and those big wins, so is this a retro masterpiece or is it past its prime? Let’s take a look in our Fruits & Clovers: 20 Lines slot game review.

The Fruits & Clovers: 20 Lines slot game is slavishly loyal to the format of a fruit machine, with all your favourite symbols on the reels, in excellent detail almost like an oil painting. Each one is bright and shiny with water droplets so that they look especially juicy, and you’ll find everything from grapes and lemons to oranges and watermelons alongside stars, lucky sevens and the four leafed clover. You couldn’t accuse this slot of being over imaginative, but it looks the part and fans of old style games will be happy with the results.

There may be more on offer than the traditional three reels and one row that genuinely retro slots had, but the five reel and three row setup is still fairly typical of modern slots and nothing out of the ordinary. As the title implies there are 20 pay lines to play with, though the betting limit is also a sight higher than you might find in an older slot, with £/€/$100 per spin possible at the top end. There aren’t too many other features to speak of, except that the generous payouts possible at the top end can result in prizes of up to £/€/$150,000 per spin for five star wilds in the main game. For one spin, that’s not a bad prize at all!

The simplicity of this slot really kicks in during the bonuses, mostly because there aren’t a huge number of them. There are no separate bonuses at all, such as free spins or pick and win games, though there is still a scatter and a wild which perform their usual duties while a full screen of wilds will pay that all important 1500x your stake. Some players may be disappointed at the lack of features, but at the same time you can’t deny that it’s enticing to be just a single spin away from a huge fortune if you strike it lucky, with many smaller but still generous prizes to be had with lesser spins.

Fruits & Clovers: 20 Lines is a simple slot by design and at heart, polishing up the graphics and adding some prizes and paylines above the norm here and there but none of the features you might expect from a modern slot. While this game might not be as feature packed as some games, the ability to win amazing prizes with just one spin should be enough to tempt anyone!