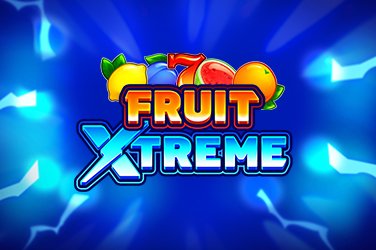 You might think that there are only so many things you can do with a fruit machine, it’s a pretty simple concept after all, but that doesn’t stop developers like Playson from trying to mix up the genre as much as they can in the quest for something new.

Fruit Xtreme is one example of that in action, bringing a slot that’s part fruity and part extreme sport, with all the fire and excitement you could wish for as well as some top prizes and fun bonuses. So is this game extreme or a dud? Let’s take a look in our Fruit Xtreme slot game review.

The first thing you might notice about Fruit Xtreme is that it’s got some very clean and modern looks, updated massively from older fruit machine graphics and different even to other Playson fruit games. The background is electric blue and charged with flashes of lightning as you play, while the fruit itself is rendered with clean lines and modern design rather than the oil painting style of fruit that you might be used to. All of the most famous fruits are there: Plums, cherries, oranges, watermelons, the BAR symbol and the star scatter, and there are even some cool fire animations that take over the symbols when you make combos with them.

The fun of this game isn’t in its wild and wonderful game mechanics, which as you might expect are pretty standard for a fruit machine, including the normal five reels and three rows with five pay lines to play on. Things get a bit more interesting with the betting limit, which stands at a decent £/€/$100 per spin, especially good when you consider the maximum prize is 5000x your stake, meaning a maximum cash prize of a massive £/€/$500,000. Most of the money in the Fruit Xtreme slot game is to be won in the main round, and there aren’t too many features, but with an RTP of 96.3% you won’t be out of pocket either, especially if you do well with the bonuses!

One of these features is the scatter symbol, and while it doesn’t activate any features as it would do in other games, it can reward you with up to 50x your stake if you land five anywhere on the reels – they don’t have to be in a line. The closest thing to a real bonus in this game is the fruit multiplier feature, which grants you a multiplier whenever you manage to three whole reels with fruit symbols. The fruits are of course the lesser paying symbols, but that won’t matter too much when you manage to fill all five reels for a massive multiplier of up to 5x your win!

Fruit Xtreme is a little bit different to the other fruit machines you might be used to, even if that’s in looks rather than how it plays. There aren’t a load of flash mini games or bonuses to play, but with really big potential wins in the main game, who needs them? If you like old fashioned slot action with some nice new clothes, this is where it’s at.