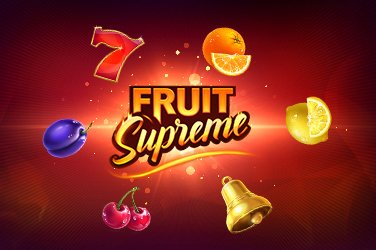 Fruit Supreme looks about as classic as they come, even by the standards of this latest generation of classic inspired fruit machines on the market. This game falls into Playson’s range of Timeless Fruit Slots, as they call them, but unlike the others there is no obvious hook like extra jokers or extra clovers to get the player interested.

So what’s the deal? Is there more to this slot than meets the eye, or is it Playson’s simplest slot yet? Let’s take a look in our Fruit Supreme slot game review.

Much like the rest of the games in Playson’s Timeless Fruit Slots series the background to the Fruit Supreme slot game is a deep, dark red, while the fruit symbols themselves are very well drawn and look almost like an oil painting with a shiny finish and water droplets dripping off them. In terms of the symbols it’s all very much as you’d expect from a fruit machine: Cherries, lemons, oranges, plums and the high paying lucky 7, though the dreaded blank symbol also makes an appearance in the shape of a faded grey X. Keep an eye out for that! The animations are pretty sparse, but the fruit is illuminated and a line appears to show you how you’ve won, which is a useful if uninspiring touch.

This slot is also smaller in size than you might be used to, with only four reels to go alongside the three rows rather than the usual five, but looked at another way it means you have to land fewer symbols to get those top prizes, so it’s not necessarily a disadvantage. There are 25 pay lines to play on and the maximum bet is pretty generous at £/€/$100 per spin, so all in all this slot reveals itself as a win-or-bust game in the old school style, rather than a modern slot with all kinds of tricks up its sleeve. Once again this is not necessarily a bad thing, and with a maximum possible jackpot of £/€/$400,000 you will be glad of the fact that the top prize is just a single spin away rather than being hidden behind a load of mini games and features. The RTP is also a generous 96.27%, slightly above average, so the odds are on your side too!

As a simplistic retro slot there are not actually any special bonus games like free spins or pick and win features to speak of, but that doesn’t mean that Fruit Supreme has no secrets at all. One feature of note is the stacked symbols mechanic, which tends to make higher paying symbols land on the reels, taking up whole reels at once or even the whole board. A second feature is the multiplier, which doubles the value of all wins generated by filling a reel with the same symbol, which is another nice little bonus you may have missed.

Fruit Supreme is probably one of Playson’s most simplistic, back to basics takes on the modern fruit machine, and unlike other games in its series it doesn’t have any specific features whatsoever. That’s nothing to be concerned about, however, because this game doesn’t skimp on the prizes, with a huge jackpot available to lucky players. If you like your slots simple but effective, it’s hard to imagine better!