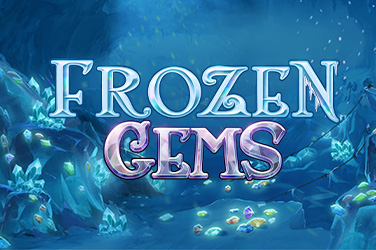 Developed by Play ‘n’ Go, the Frozen Gems Slot Game features five reels, three rows and up to 8,748 winning ways. The fully optimised design is compatible across all devices, including touchscreen tablets and smartphones.

With a Return to Player (RTP) of 96.63%, the Frozen Gems Slot Game is considered a medium volatility game.

The Frozen Gems Slot Game has an arctic theme, with an icy blue design that works well alongside the game’s story of being lost during an expedition. There isn’t too much going on in the backdrop, but the graphics are high quality and there’s a definite resemblance of Disney’s popular Frozen movie.

Symbols-wise, you’ll find the usual set of low-paying playing card royals – 10, J, Q, K and A, alongside a range of colourful gemstone symbols. The orange gemstone is the most rewarding of the gemstones, paying 0.25, 0.6 or one times your stake for landing three, four or five. The W symbol acts as the wild and can substitute for all standard symbols, as well as paying 2.5 times your total stake for a full house of five.

Each spin begins with five reels, three rows and 243 winning ways, but whenever a winning combination is formed, the cascading reels feature will be activated. Any symbols making up the winning combination will be removed and new ones will drop in to replace them, hopefully resulting in new winning combinations being formed. This continues until no further wins land.

There’s a bonus reel above the main reel set, made up of five frozen positions that can be unlocked by landing three winning symbols or scatters on the reels. There’s a bonus wild feature that will turn all reel symbols into wilds, and splitting scatters features that will split all of the symbols on the reel into two or three, increasing the number of winning ways.

Trigger the free spins round by landing three scatter symbols. You’ll be rewarded with nine free spins alongside a prize worth five times your stake. Each cascading win will increase the multiplier by one, up to an unlimited value.

The Frozen Gems Slot Game is an exciting slot with plenty of bonus features to keep entertainment levels high throughout. The cascading reels, expanding multipliers, and splitting symbols all offer the chance to boost your prize pot substantially, while the frozen spins feature is relatively easy to trigger.

We have some slots are that absolute jewels like Rise of Merlin, Aztec Warrior Princess, Jolly Roger and Testament.