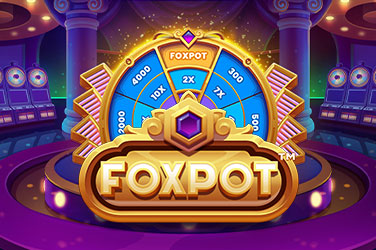 Even though we’ve all grown up, some things never change. One of these is our love for a good old fashioned game show – and whether it be the flashing lights and tension or that cheesy host who has been with us since childhood… There is something in this world to please every single one of us!

The Foxpot slot game does its best to embody this idea through their new release welcoming you into an exclusive casino where they have everything from wheel spinning games filled with prizes galore (big ones!) as well as multipliers which will increase your wins by up to 200% if five stars appear during free spins at any point. Play this slot right here at CasinoNZ!

Foxpot is one of the few games you’ll find these days where the mechanics are more interesting than its looks. That’s not to say it doesn’t look good, and we enjoyed how slick and colourful this slot game was with a casino behind that reminded us of an out-of-this world TV show!

The lights of slot machines flash behind the reels, and laughter can be heard in the background. The voice on TV is excitable as they narrate action for what you’re playing! You’ll feel like a high stakes gambler when you play this game.

The traditional fruit symbols are mixed in with the multiplier bonus icons, making for an interesting and unusual gameplay setup. Although there is only one row and three reels, this game is full of excitement.

This game is easy to play and a lot of fun, but it might not be what you’re looking for if you want good odds. The return to player (RTP) percentage for this slot is 96.36%, meaning you have a good chance of recouping some of your stakes over long-term play. You’ll find that there’s more than meets the eye with this slot as well!

It’s nice to see such a high RTP rate from Foxpot, with it being one of the biggest factors that players consider when deciding on which slot to play.

If you find yourself in the bonus round, it’s all about spinning that wheel! The prize wheel is just above those reels and lets you get a chance at three different rewards. Landing among one to three of these symbols will let players explore each ring from the outside towards its centre for their reward.

Every win multiplies into more wins with this system. The first ring grants you up to 1000x the value of your bet, and every subsequent tier lets you spin again for increasingly lucrative bonuses!

The Foxpot slot game is a class act, with an easy-going concept that’s both fun and rewarding. The visuals are sharp and well rendered to create this pleasant atmosphere without the pressure of trying your luck in Vegas or Atlantic City. One bonus feature we love about Foxpot is how there can be wilds as well as scatter symbols that offer the opportunity to win big!