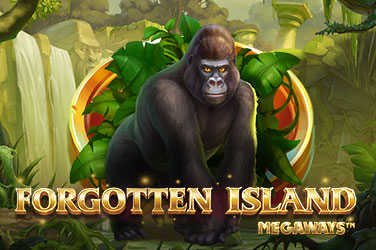 Developed by Microgaming in partnership with All41Studios, the Forgotten Island Megaways Slot Game is a King Kong-inspired slot with six reels, five rows and 117,649 winning ways. Thanks to the fully optimised design, you can enjoy this game across all devices, including laptops, desktop PCs, touchscreen tablets and smartphones.

With a Return to Player (RTP) of 96.25%, the Forgotten Island Megaways Slot Game is considered a high volatility game. There’s a top prize of 7,000 times your stake up for grabs with each and every spin.

The Forgotten Island Megaways Slot Game has an immersive theme – you’ll find that you’re transported into the depths of the jungle, with the reels surrounded by swinging vines and waterfalls, with a King Kong-style gorilla sat to the left-hand side. The graphics are high quality with seamless animations and a fitting soundtrack to accompany the gameplay.

Symbols-wise, you’ll find the usual low-paying playing card royals – 9, 10, J, Q, K and A – alongside grapple hooks, treasure books, lanterns and gorilla skulls. The latter is the most rewarding, offering up to 50 times your stake if you manage to land a full house of five. There’s also a wild, represented by the compass, which can only appear along the top row.

The Forgotten Island Megaways Slot Game’s minimum bet sits at $/€/£0.20 per spin, with the highest possible wager limited to $/€/£20.00. With a relatively low upper bet limit, high rollers might choose to swerve this slot, though there are winnings of up to $/€/£140,000.00 up for grabs if you hit the jackpot when playing with the top stake.

Each winning spin gives you the chance to unlock the Kong Spin feature, which triggers at random throughout the base game and results in a win multiplier of two, three, five or ten times your prize. Each consecutive Rolling Reels win increases the win multiplier by one, and there’s no limit to how high it can reach, so you can rack up some serious prizes here.

The Forgotten Island Megaways Slot Game is an entertaining slot with a solid theme and some exciting bonus opportunities. The design of the game is fantastic, with high-quality graphics throughout. The multipliers and free spins bonus round are the keys to landing incredible wins with this game.