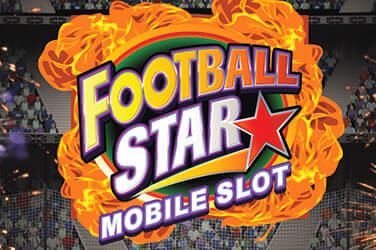 As you might guess, Football Star is a slot game all about football. This Microgaming slot, first released in 2014, still looks good today, and it’s one of only a few slots themed around football out there.

Symbols on the reels include a football Scatter, various football players, a pitch and some boots, and the reels are set against the backdrop of a packed stadium.

Football Star is a ways-to-win slot featuring 243 ways to win. This means that the slot doesn’t have pay lines; instead, players have to land identical symbols on adjacent reels starting from the left of the display. You will receive a payout when gaining three or more adjacent symbols, with the highest paying symbols in the slot being the red-shirted football star, which pays out 10x the bet for five symbols on adjacent reels.

The blue-shirted football star pays out 5x the bet for five symbols on adjacent reels, while the lower value referee pays just 2.5x the bet for five adjacent symbols. Football Star also features the popular Rolling Reels mechanic, which means that every time a winning combo hits the reels, those symbols disappear, and new ones fall into place. This means multiple wins can land on the reels from a single spin, and it’s very welcome in this slot.

There are a couple of unique features to look out for in Football Star. The Striking Wild feature can randomly trigger on any spin, turning reels 2, 3, or 4 Wild and offering a guaranteed win. On top of this, players can also start a Free Spins round by landing three or more Scatters anywhere on the reels. Players can win between 15 and 25 free spins by landing three to five Scatter symbols. During free spins, consecutive wins due to the game’s Rolling Reels will award multipliers up to a maximum of 10x – which means some massive wins can land on this round, so watch out.

Football Star offers an average return to players of 96.29%, which means that for every $100 you spend on the game, you can expect to win back an average of $96.29. This is not bad at all, average or just above it, and of course, if you’re lucky, you can win back much more than this. Football Star is also a medium variance slot, which means it’s reasonably well balanced for most players in terms of how often and how big the wins are that roll in; you shouldn’t have to wait too long to see some of your money come back.

Football Star is a fun slot with a good average return. While the slot’s features aren’t breaking any new ground, they’re executed well in a slot that looks good years after release. There aren’t too many football slots around, never mind decent ones, so if you’re a fan of the glorious game, it’s time to pick it up.