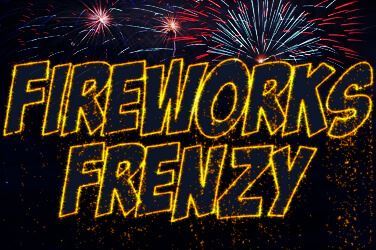 If you play slots regularly, you will see certain themes used repeatedly. We’ve all seen plenty of games based on Ancient Egypt, Aztec Treasure or various fairy tales. So it is rare to come across a fresh theme, but Eyecon appears to have done that with Fireworks Frenzy.

Aside from Esqueleto Explosivo from Thunderkick, there aren’t any high profile fireworks-related titles out there.

This game has a standard layout, with five reels and 25 paylines. This is a highly volatile slot with a potential win of x360 your stake on every spin, though the biggest wins are to be found in the Free Game bonus, which we’ll get to later. The game can be played on all devices for between $0.25 and $12.50 per spin, so should be suitable for a wide range of players, although with an RTP of 94.9% it won’t win any awards for generosity as a high volatility slots title.

Eyecon have many strengths as a games developer, but design and visuals aren’t high on that list and despite the exciting name, it has to be said that Fireworks Frenzy is a disappointment. The game is set against a night sky, but the images are a little bland and the soundtrack doesn’t really stir the imagination. We certainly feel that more could have been made of them.

On the reels, you will see the usual card values, from Ace to 9, and these are joined by various representations of fireworks. These include the pink and the blue firework, which both award 1,000 coin payouts, and the yellow firework, offering a 2,000 coin reward. And if you can land between two to five rockets on an active payline, you can win a payout of between 2 and 3,000 coins.

The Catherine Wheel icon serves as the wild, though it only appears on odd-numbered reels, replacing any of the other game symbols with the exception of the Scatter. And if you bring up a winning combination that includes the Wild, the payout will be trebled. Finally, the key symbol in this game is the red firecracker, which serves as Scatter. If can land three or more of these icons during a spin, you can claim a prize of up to x300 your stake, as well as triggering the Free Games bonus.

The Free Games bonus is a generous free spin feature that occurs with pleasing regularity. Landing three or more Scatter icons will give you up to 25 free spins. In addition, the Wild symbol will expand to fill all reel positions, adding the possibility of many more combinations and trebling wins.

For those willing to take a few extra chances, there is also the Gamble feature. This enables you to increase your winnings after a payout by picking whether the next card from a standard deck will be red or black. Guess correctly up to the maximum of five times and you can significantly boost your payout. You can also cash out of the Gamble feature at any time.

Although Fireworks Frenzy is a little disappointing visually, the base game and the bonus features provide enough entertainment to make this game worth a look, and the Gamble feature will appeal to those who like to go for the bigger prizes.